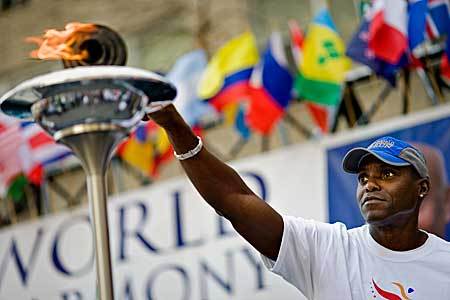 We were honoured that Sudhahota Carl Lewis was the first recipient of the Torch-Bearer Award. Sudhahota, as he was affectionately called by Peace Run founder Sri Chinmoy, has been an enormous supporter of the Peace Run and World Harmony Run since its inception in 1987.

Known globally as a winner of nine Olympc Gold medals Sudhahota has gone on to serve young aspiring athletes throughout America and is currently promoting the benefits of health and fitness through his social networking initiative called FitForever.com.

Sudhahota stands as a true champion and an inspiration to all those who aspire transcend. We honored and delighted to have been able to present this award to him.