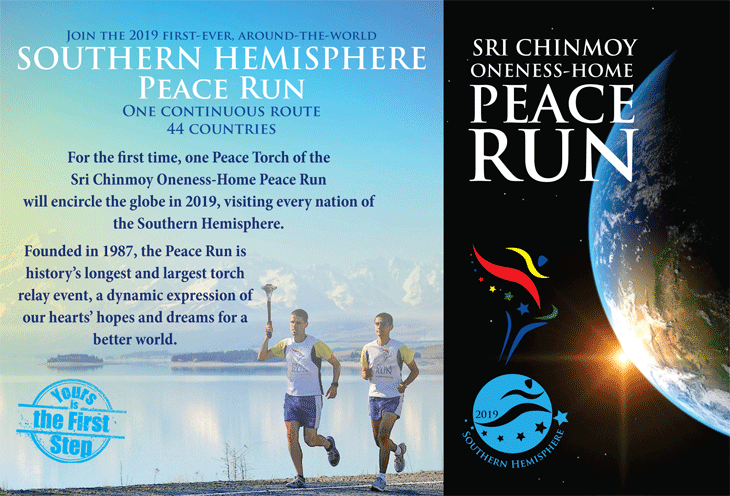 In 2019, for the first time, the Sri Chinmoy Oneness-Home Peace Run will encircle the entire globe in a calendar year, bringing the Peace Torch to every country of the Southern Hemisphere.

Starting and finishing in Bali, the Torch will travel to Vanuatu, Timor Leste, Solomon Islands and Papua New Guinea, in early February before commencing its Australian journey in Brisbane on 12 February, concluding in Melbourne on 1 March. From Melbourne, the Torch will fly to New Zealand where the route will cover the entire length of the nation from Cape Reinga at the northernmost point of the North Island (4 March), to Bluff at the southern extremity of the South Island (27 March. From here, a side journey will bring one Torch to Antarctica, while the main Torch will proceed to visit the Pacific Island Nations of Tuvalu, Samoa, Fiji and Tonga in early April. 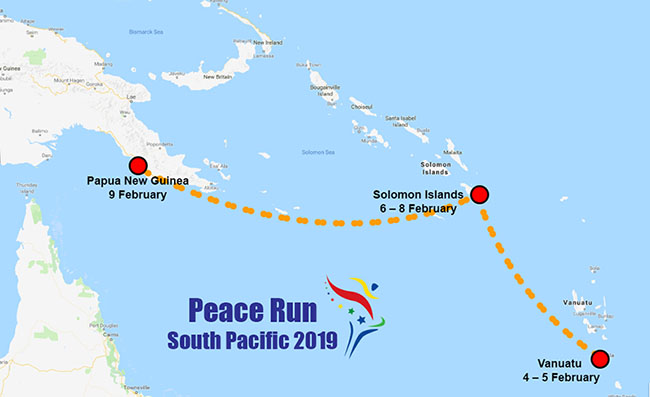 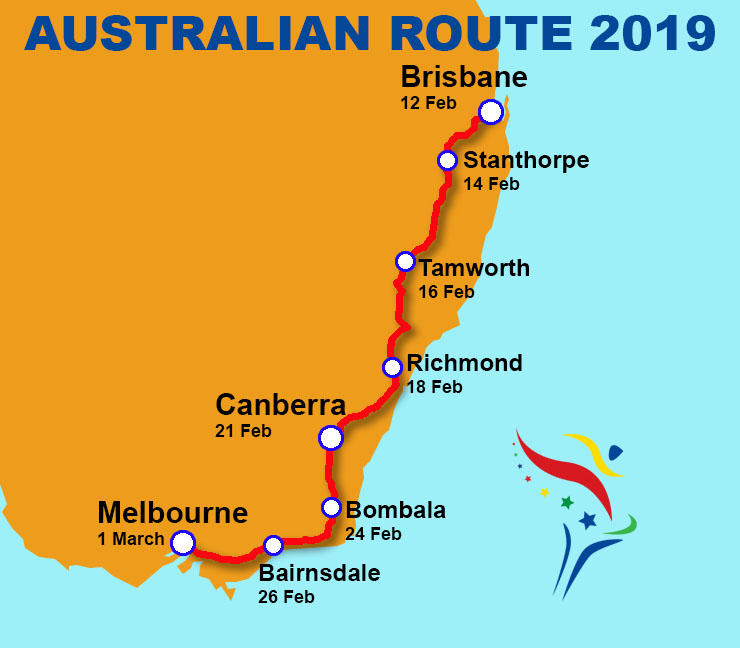 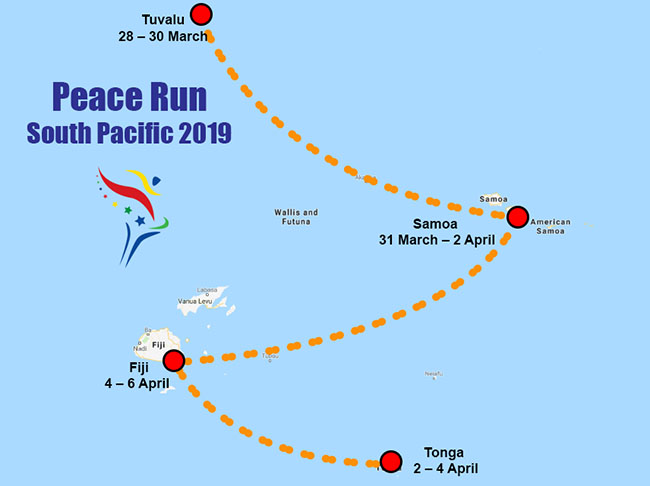 The Peace Torch will make stops in Ecuador, Peru, Bolivia and Paraguay in late April/early May, before commencing the single longest continual running stretch of its round-the-world journey across South America. Commencing in Valparaiso, Chile on 8 May, the Torch will be carried across the Andes before traversing Argentina to Buenos Aires (24 May), continuing from Montevideo (29 May) through Uruguay, to cross the border at Chuy into Brazil on 5 June, concluding in Rio De Janeiro on 30 June.

In addition to ‘off-route’ visits to Angola and Malawi, the main route through Southern Africa will commence in Lesotho on 9 September. From Lesotho the route will traverse the continent as follows: 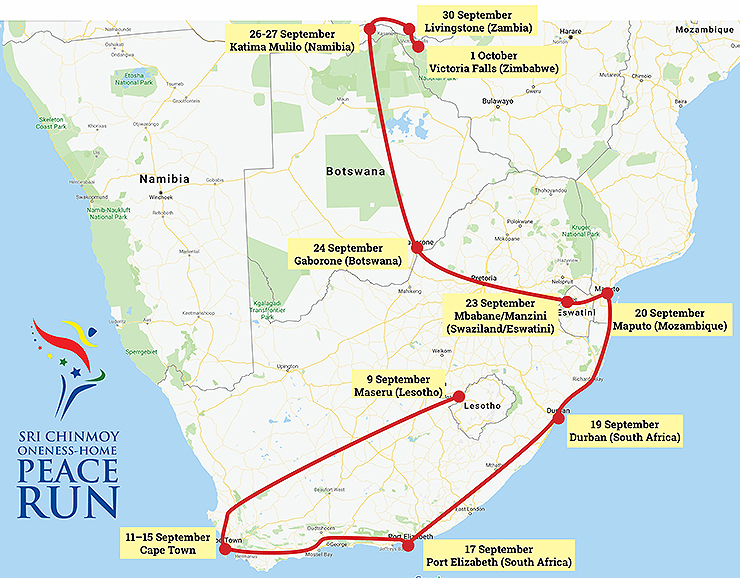 From there the Torch will travel to Burundi, Rwanda, Uganda, Kenya and Tanzania in a 3-week run/drive/bus/train adventure, culminating with an ascent of Mt Kilimanjaro. 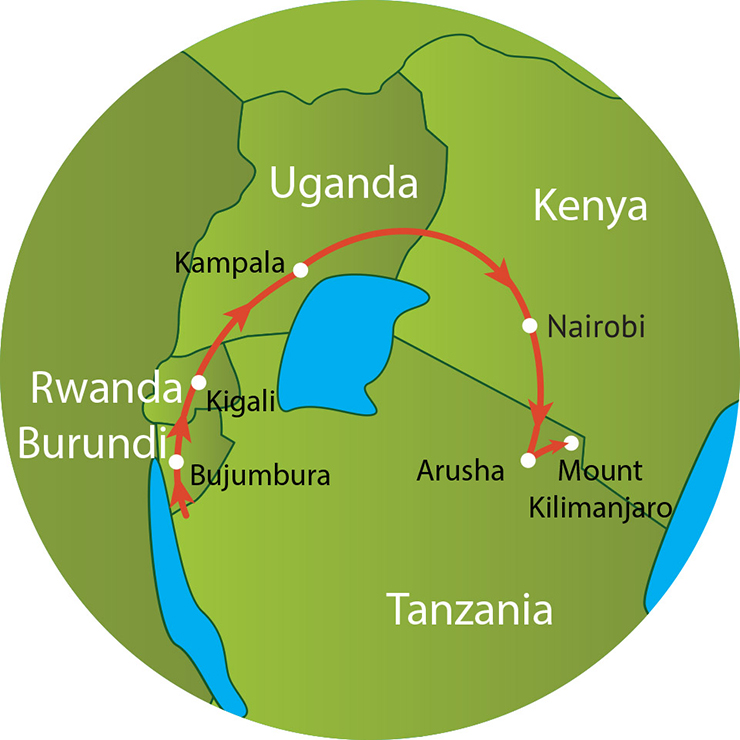 In late October, the Peace Torch will embark on its final leg visiting Seychelles (25-26 October), Mauritius (27-29 October), Madagascar (30 October-2 November) and Maldives (4-6 November) before returning to Bali for the Grand Finale, a week of events and festivities in early November 2019. 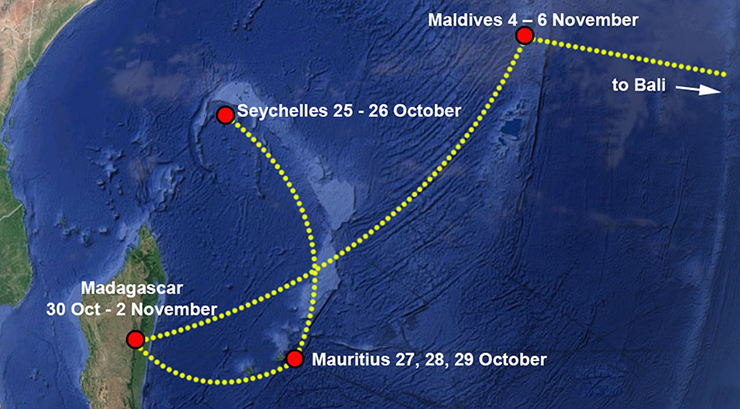