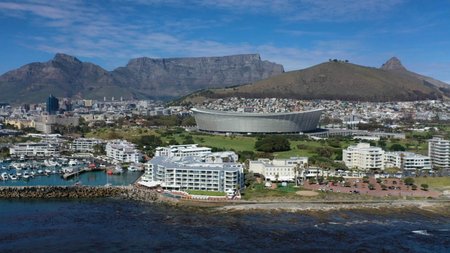 Yet another glorious morning in picturesque Cape Town and tomorrow is the Cape Town Marathon.

The Cape Town Marathon is currently Africa's only IAAF Gold Label marathon reaching the same accolade status as that of the London and New Yew York marathons. What makes it unique is that the Cape Town Marathon is being dedicated to peace and we were told that approximately 50% of the applicants who registered for the marathon have chosen to run for peace, leaving the remaining 50% running for other causes, or various charities. We were heartened to know that peace is a sentiment that is not only close to our hearts but also to all those thousands of people preparing to run the marathon here in Cape Town. "Peace begins with me," and tomorrow we will have a wave of peace runners making each step of their 42km run a symbolic step for peace through the Cape Town CBD and surrounding suburbs.

In the lead-up to the Cape Town Marathon, our team attended the Captain's Breakfast this morning where well-loved ambassadors of the marathon, Elana Meyer and Francois Pienaar, have, as in the past, challenged (typically) South African celebrities, sports people and captains of industry to use their status to support local causes/charities, to raise public awareness and/or help to generate funding for that cause. This event is known as the Captain's Challenge. Today we met both well-known and lesser known individuals, all equally extraordinary, and giants in their own fields, picking up the mantle of the Captain's Challenge. It was inspiring to hear each of the Captain's stories - all making ripples in this tide for change. Isaac Newton said, "If I have been able to see further, it was only because I stood on the shoulders of giants." Thank-you Captains for letting us stand on your shoulders today. If we could catch a glimpse in time we hope for a future where soon we will all be giants, visionaries, dreamers and enablers to bring together our world-family. 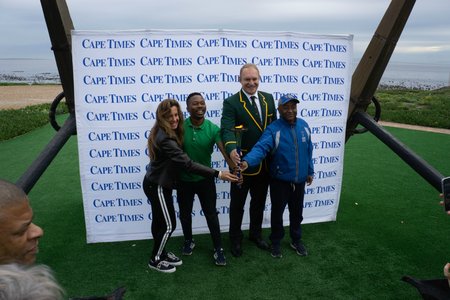 Holding the Peace Torch here is Francois Pienaar standing in his Springbok blazer with two of the 2019 Captains to the left of him, Rhonda Vetera and Siyabulela Sokomani, together with Peace Run team member Shree Chirkoot. 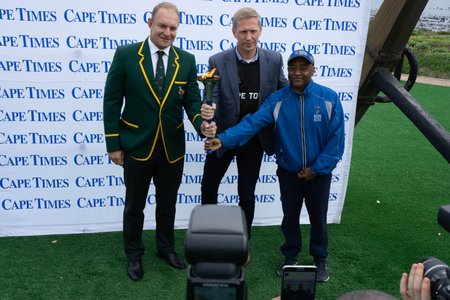 Almost a year ago to this day, well-loved national rugby figure Chester Williams added his wish for peace and held the Peace Torch after completing the Cape Town Marathon. Today, Francois Pienaar wears his Springbok Blazer in honour of his friend and teammate and one of our national heroes. Alongside him stands Alderman JP Smith. 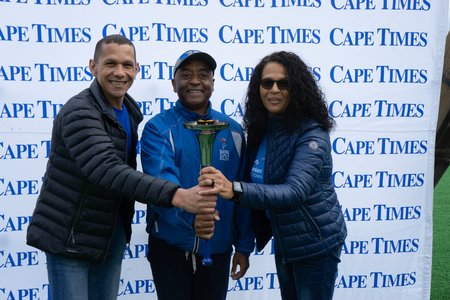 Shree stands with two well wishers for peace who will run in the Sanlam team; Sanlam are also sponsors of the Cape Town Marathon. 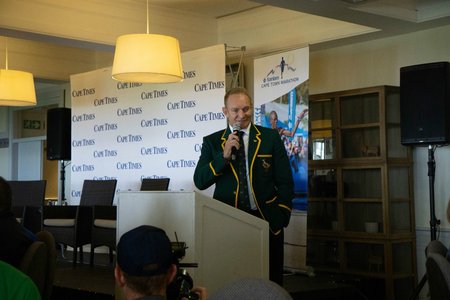 Francois Pienaar addressing all at the Captains' Breakfast. 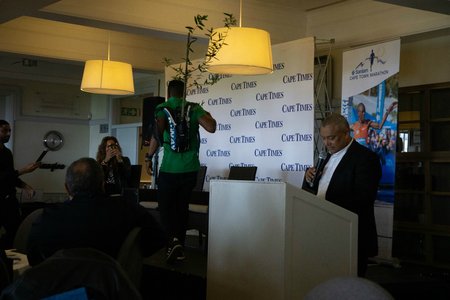 Well-loved voice of Cape Town, Aden Thomas from Heart FM introduces the first panel of 4 individuals that have taken up the Captains' Challenge. Aden will also be running the marathon. His motto to all is, "If this body (meaning his), can do it, any body can do it!" Thank-you Aden for being an instrument to inspire.

Group photo of four of the Captains. From left, Rhonda Vetera who we are told has also been voted in the top 50 most influential women in technology in the world. Having completed 4 ironman challenges already and an advocate for wellbeing, she will be running the marathon and championing Endurocad, an organisation that was established with the purpose of identifying, nurturing, training and celebrating the success of young talented athletes, and a foundation that is also close to friend, Elana Meyer's heart.

Beside her to the right is Siyabulela Sokomani who is running to raise funds to buy trees to plant in the townships. He grew up in Khayelitsha where he says his school had no trees. Starting as an aspiration for him and having run his first solo Cape Town marathon in 2015 with a tree on his back, Siyabulela will now be joined by a team of others, which he says, will be like a "running forest" in his 4th time running the Cape Town Marathon.

In peach scrubs, is a representative from the UCT medical student society who alongside a team of fellow medical students raised over R150 000 to raise enough money to add an extra day of surgery at the Red Cross Children's Hospital on Saturdays so that children in need of urgent life-saving surgery can be appropriately attended to.

To the far right, stands a prominent visually impaired woman who runs to support people with disabilities. She will be run the marathon with a running assistant... 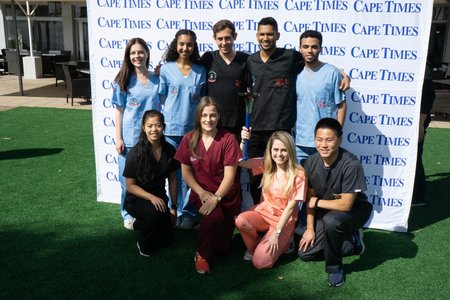 The team of medical students who will be running the 10km run in their scrubs tomorrow. 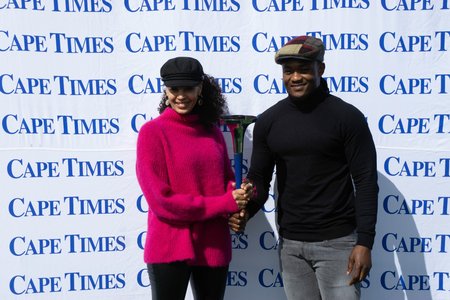 Seabelo Senatle who plays for the Stormers and was a member of the Rugby Sevens that won a bronze medal at the 2016 Olympics will join the thousands of runners who will run the scenic 10km race tomorrow looping along Beach Road from Green Point Stadium along the promenade to Seapoint and back, with a view of the Atlantic Ocean to the right going out to Seapoint, and to the left on the return to the stadium. Epic! 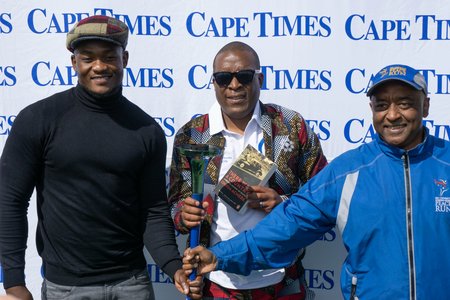 In the middle is Advocate Marukgwane Moremogolo who is running the marathon to champion "Literacy for Life" encouraging the power of knowledge and books in disadvantaged homes. He hopes to read 15 pages of his book by the time he finishes his marathon. 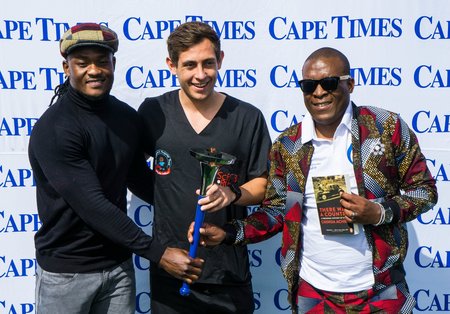 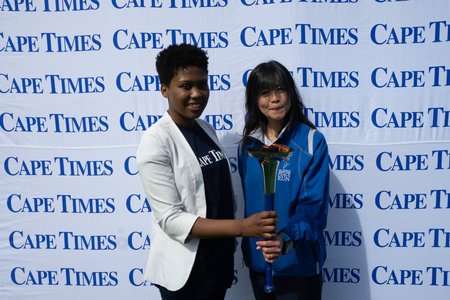 Here Penny stands with Jane Folodi, who is a journalist for Independent Media. She is covering the morning's Captain's Breakfast and Q&A session. She was eager to make a wish for peace and hold the Peace Torch. 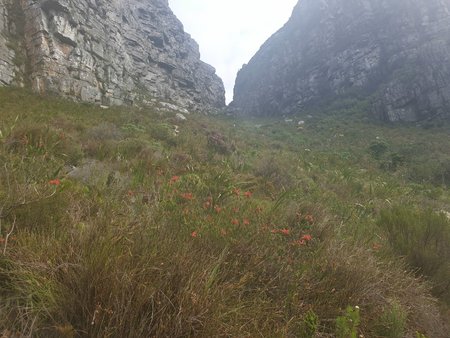 After our morning session at the Cape Town Hotel School, the Peace Run team took the opportunity to take the Peace Torch up Table Mountain. Rather than making our way up on the cable car, we opted for a more challenging ascent and instead hiked up the Platteklip Gorge entrance. 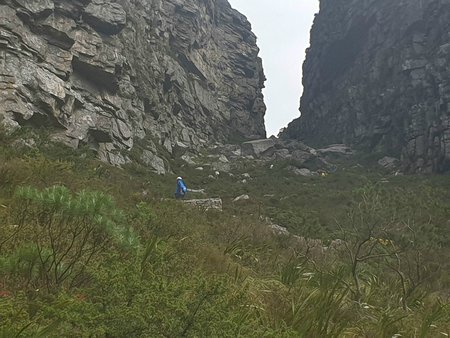 Balarka and Tafadzwa racing to the top. 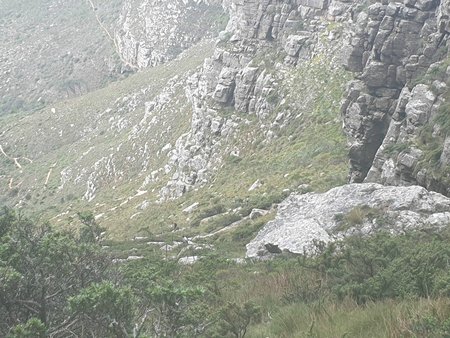 Opportune time to enjoy the views on our way up, and catch a breath.

View from the top of the gorge - a feast of yellow wild flowers, which are endemic to the Cape area. 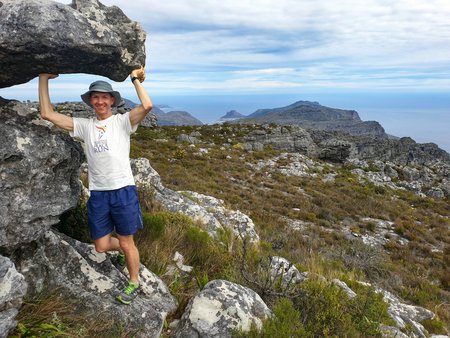 For the average person, the climb up Platteklip Gorge would typically take 1.5 hours. For others like Balarka, who took a whopping 46 minutes to climb, it seems there was also time to do one-legged boulder-press lifts! Not for the faint-hearted. 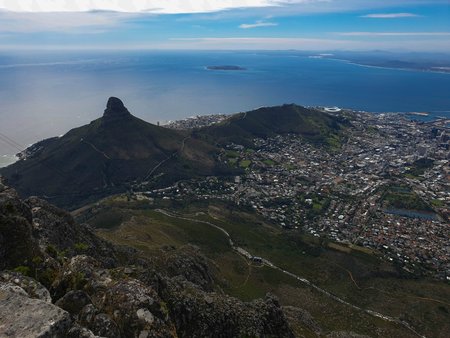 We could see the iconic Robben Island and Lion's Head from the top. 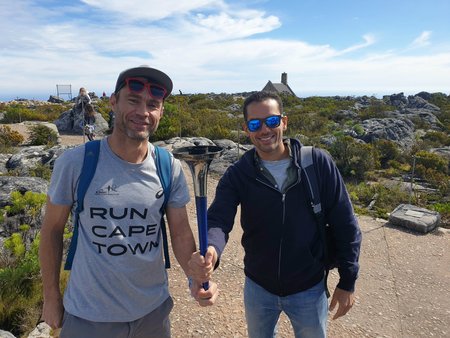 Tourists from Belgium and France on holiday in Cape Town and who heard about the Sri Chinmoy Oneness Peace Run in Australia. Isn't the world a small place. 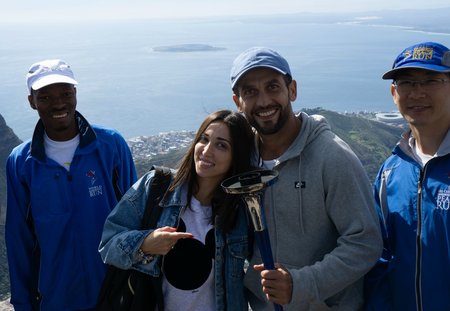 Professor Mohamed Dirani holding the Peace Torch was also one of the speakers at the Captain's Breakfast and here we meet him again on Table Mountain. He is raising awareness and funding for empowering people to achieve their best vision through education and technological solutions. 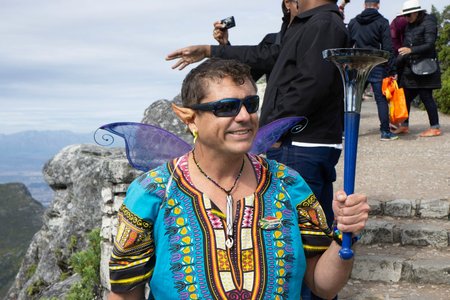 We also met other well wishers of peace that put a smile on our face and warmed our hearts. 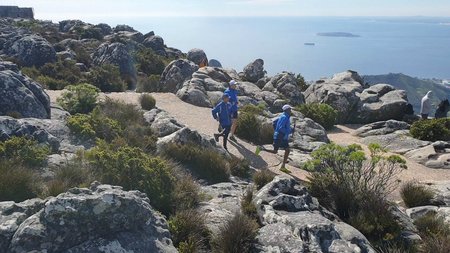 As if climbing up Platteklip Gorge wasn't enough of a challenge, Cliff, Balarka and Tafadzwa run along the top of Table Mountain to stretch out their legs. 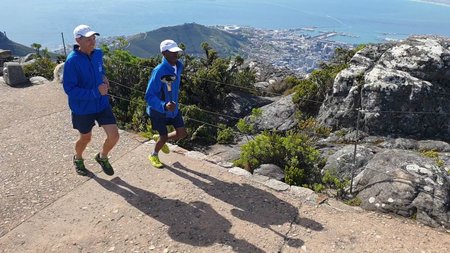 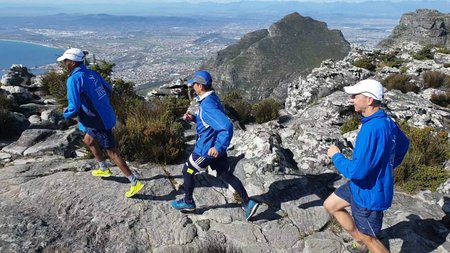 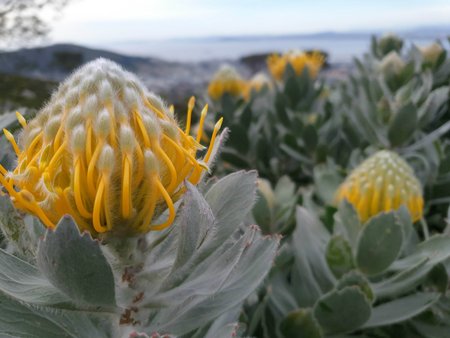 Lots of yellow pincushion Proteas. And how beautifully and seemingly effortlessly they grow on the mountains, in spite of the inclement weather they can sometimes be subjected to. 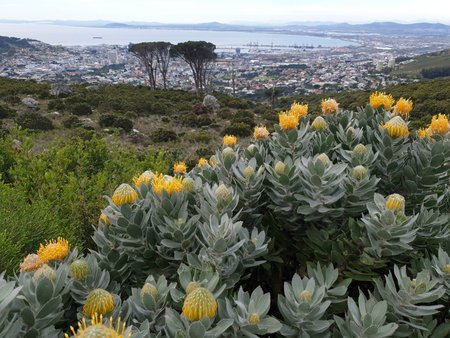 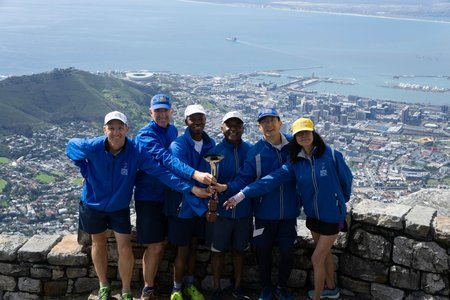 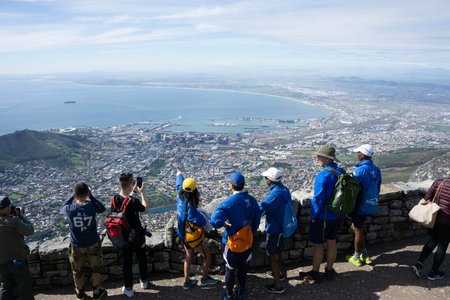 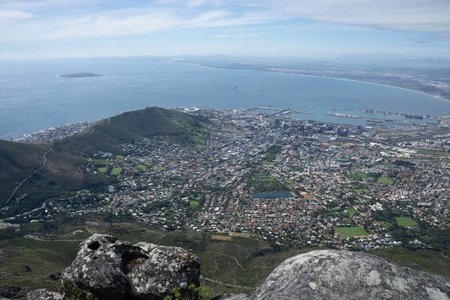 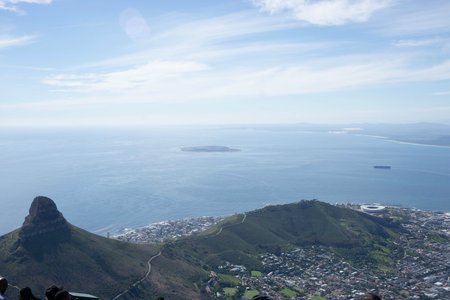 The iconic Lions Head and Robben Island. Another remarkable day in Cape Town.