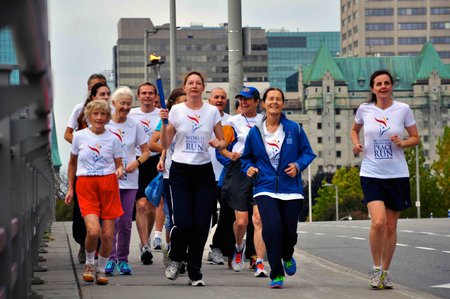 Ottawa welcomed the Peace Run as we began our relay to visit a number of embassies in the Canadian capital. 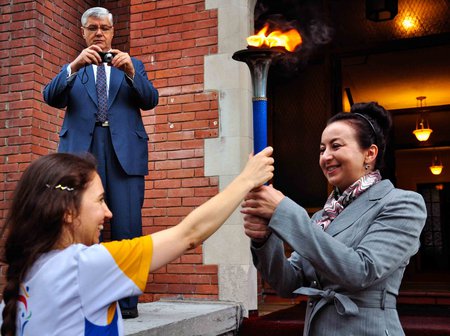 Sunshine and a warm welcome from H. E. Biljana Gutic-Bjelica, Ambassador of Bosnia and Herzegovina to Canada. 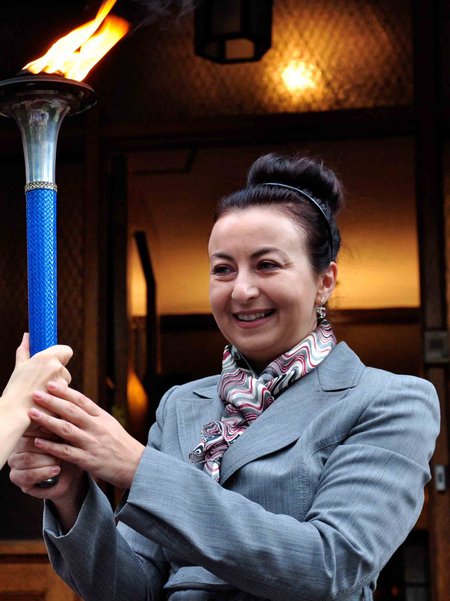 H. E. Biljana Gutic-Bjelica was the driving force for our events today and she was the perfect host. 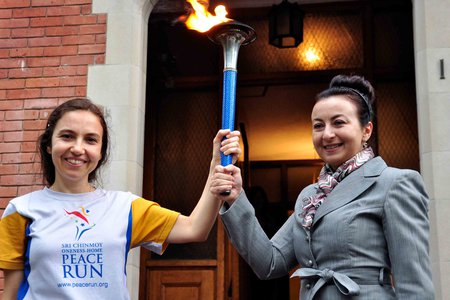 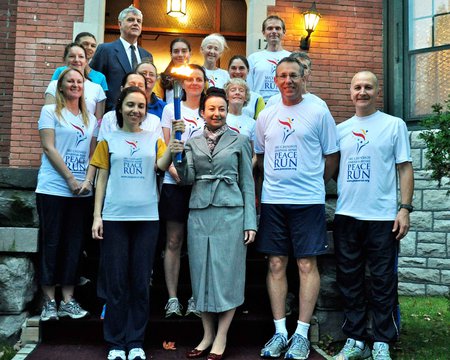 The Ambassador invited us inside the Embassy where she shared her words of her countries heart-felt love of peace and kind words of the encouragement for the ideals and vision of the Sri Chinmoy-Oneness Home Peace Run. 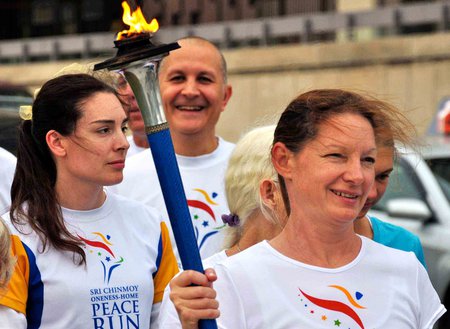 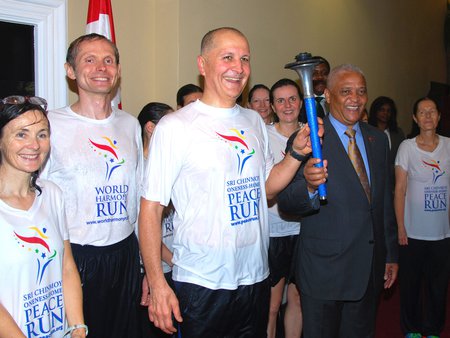 The sunshine made way for the monsoon-like rain as we made our way to the Angolan Embassy where H. E. Ambassador Agostinho Tavares da Silva Neto received the Torch.

The entire office staff came to greet us and welcomed us out of the rain. For several years the Angola mission has wholeheartedly participated in the Peace Run Embassy-Relay. 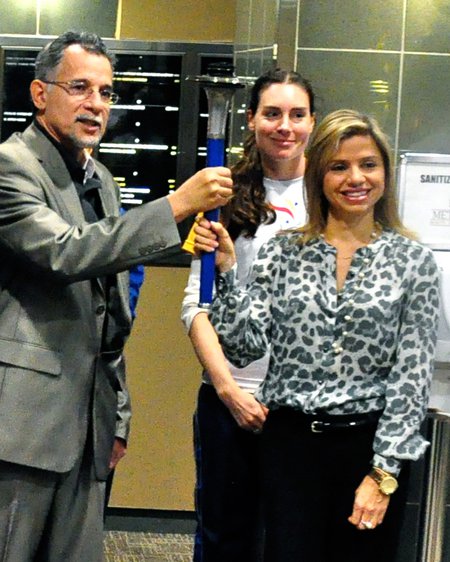 We continued on to the Embassy of Honduras, our first ever meeting with H.E. Ambassador Sofia Lastenia Cerrato Rodriguez and embassy staff. 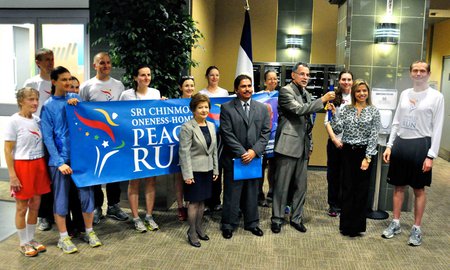 We were delighted by the Ambassador words of welcome and her enthusiastic offer to run with us the next time the Peace Run visits her Embassy. 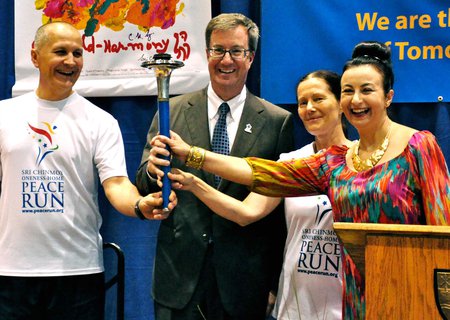 Her Excellency Biljana Gutic-Bjelica, Ambassador of Bosnia and Herzegovina to Canada hosted the evenings Peace Run Ceremony at Ottawa City Hall where invited guests were also honoured by the attendance and participation of His Worship Mayor Jim Watson. 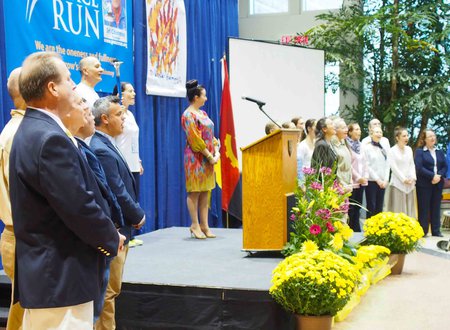 A beautiful performance of the Peace Run theme songs started off our evening's celebration. 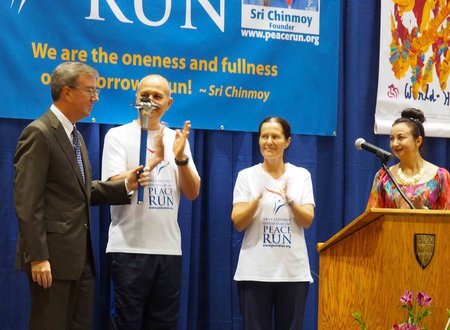 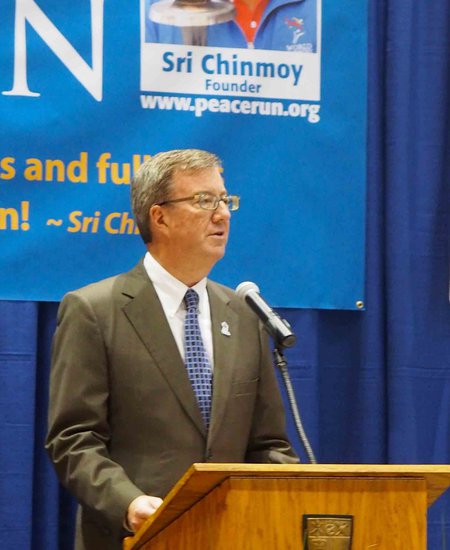 Ottawa Mayor Jim Watson welcomed guests to City Hall on behalf of City Council of Ottawa, the Nations Capital. He offered the kindest words of support and encouragement to the Sri Chinmoy Oneness-Home Peace Run for which we are very very grateful.

Mayor Watson said in part, ""On behalf of my colleagues on City Council it is my pleasure to be here this evening as we celebrate the Sri Chinmoy Oneness-Home Peace Run right here in the Nations Capital."

"I would like to thank you Your Excellency [Biljana Gutic-Bjelica, Ambassador of Bosnia and Herzegovina to Canada] very much for inviting me to join you tonight and for your personal involvement in this important event."

"Its founder, Sri Chinmoy was dedicated to the pursuit of harmony and oneness between people and different cultures and was a strong advocate of the power of sports and what sport can do to unite a country and our world. Our city has had the honour of hosting Sri Chinmoy on a number of occasions and had the opportunity to hear his simple but powerful message he advocated 'together we are united'. And very much in a place of prominence a plaque that was given to us by Sri Chinmoy is in this hallway adjacent to this hall."

"I would like to close with an inspirational quote from Sri Chinmoy, "World Harmony, World Peace these are not mere dictionary words, these are realities, Divine realities, and Supreme realities." 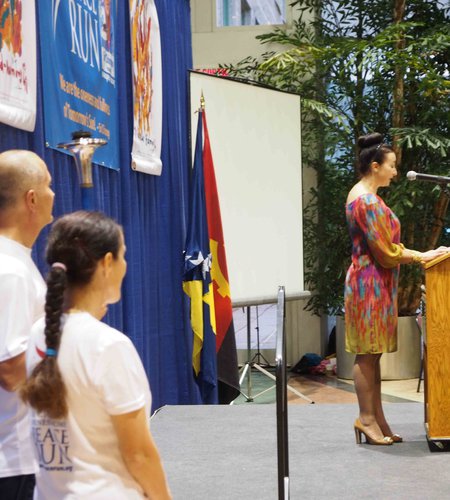 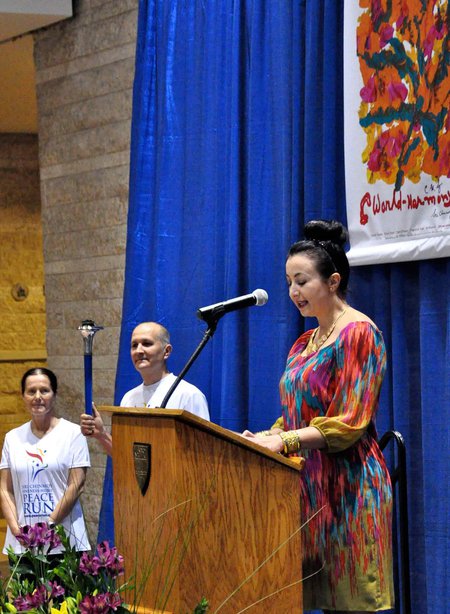 Her Excellency Biljana Gutic-Bjelica, Ambassador of Bosnia and Herzegovina to Canada, the evenings hostess inspired us with her heartfelt words excerpted below.

"World Harmony Peace Run that is dedicated to global friendship, harmony and cooperation was first established and run in 1987 by Sri Chinmoy and since then it has connected more than 140 countries in the world. It also took place today in Ottawa between several Embassies whose Ambassadors received the Torch of Peace and here tonight with us.

The idea behind tonights event, which is connecting us in our attempts to make this world a better place, is global peace promotion. And when people from Bosnia and Herzegovina, which unfortunately faced war during the 1990's, tell you how ultimately important peace is, believe me we really do know what we are talking about.

Peace is the sine qua non of human existence. Peace is the generator of any kind of development and progress, as well the absence of it is the very source of chaotic tragedy and loss of the most precious - human lives. Peace of mind of an individual, peace in community, peace in nation, global peace--it is the chain that allows us to grow and love, give and receive, become better human beings through knowledge and understanding, become who we really are." 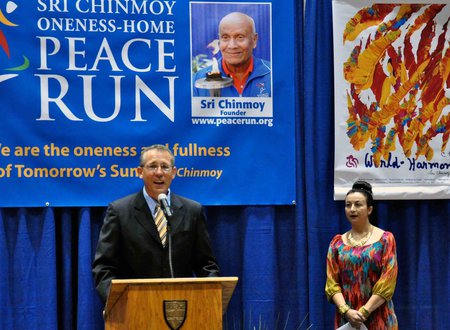 The Peace Run's Executive Director Salil Wilson shared the inspiration and vision of Peace Run founder, Sri Chinmoy. His words are excerped below.

"Your Excellencies, Ladies and gentlemen I would like to begin by sharing with you a quote from Sri Chinmoy, he once said "There shall come a time when this world of ours will be flooded with peace. Who will bring about this radical change? It will be you, you and your sisters and brothers, you and your oneness-heart will spread peace throughout the length and breadth of the world." And I thank you for your presence here tonight, the service that you render in your daily lives, proves that to be true."

"Sri Chinmoy was believer in the inherent yearning, the universal yearning for peace that we all carry inside our hearts. And how that found expression in many fields of human endeavour: through art, through sport, through literature, through music, through service and even through diplomacy. And so as you conduct you daily lives, giving expression to those various qualities, we are here tonight to celebrate and to recognize the essential importance of that and how that continued offering keeps us collectively in being." 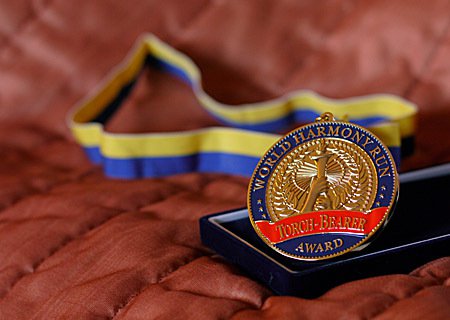 Salil Wilson then introduced the Torch-Bearer Award expressing that as we the runners have carried the torch around the world invariably we come into contact with some remarkable people. The Torch-Bearer Award was created to recognize and honour those people who have inspired their nations, their cities, and their communities through their own lives and deeds. 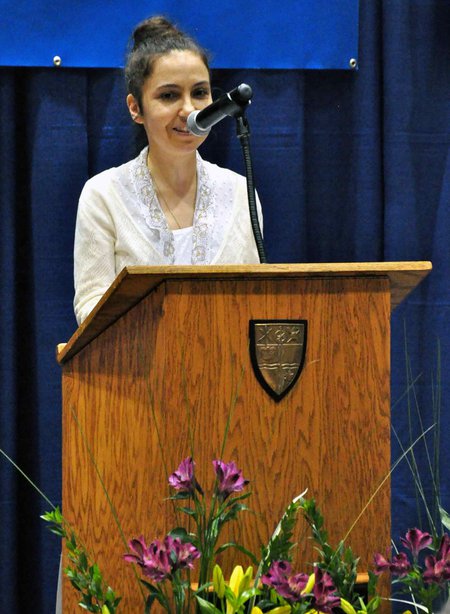 Taneesha Djuric, Peace Run organizer introduces her long time friend the Ambassador Biljana Gutic-Bjelica as the evenings first Torch-Bearer recipient for her most sincere and dedicated initiatives for our world family. Excerpts Taneesha's introduction can be seen below.

"I am very lucky to have known Her Excellency for a long time. Besides being a wonderful person with a great sense of humour, which I cannot resist mentioning, she has always been a person to bring people together, to build, cultivate and strengthen friendships, and to care for others. Over the years, her positive influence has extended further and further to touch and help many more people."

Here in Canada, as an Ambassador, she has been a great supporter and the driving force behind various activities that underline and promote peace, humanity, friendship, gender equality, human rights, cultural diversity and oneness. Just to mention one among many of her contributions she had initiated activities that resulted in the establishment of the Canada – Bosnia and Herzegovina Parliamentary Friendship Group building a bridge of cooperation and friendship between the two countries. She cultivates those same values that the Sri Chinmoy Oneness-Home Peace Run or World Harmony Run are founded upon, making her the ideal recipient for an award that we have presented to notable individuals around the world." 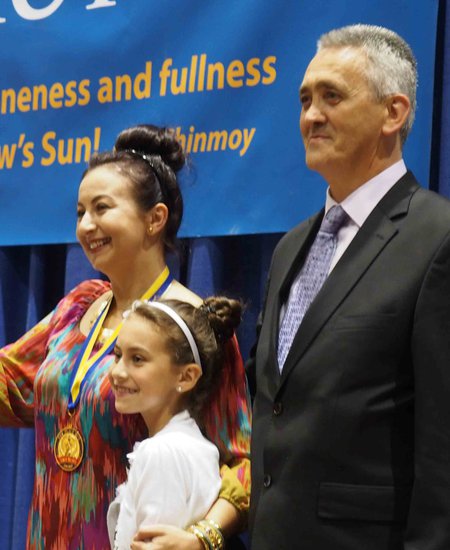 Ambassador Biljana Gutic-Bjelica is pictured here with husband and daughter along with team member Antana Loc. 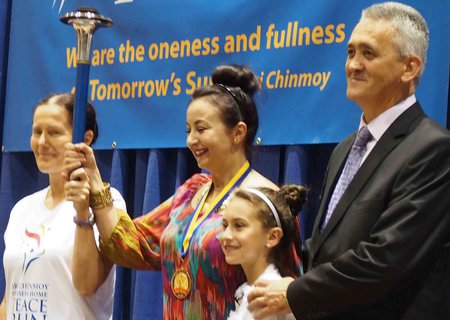 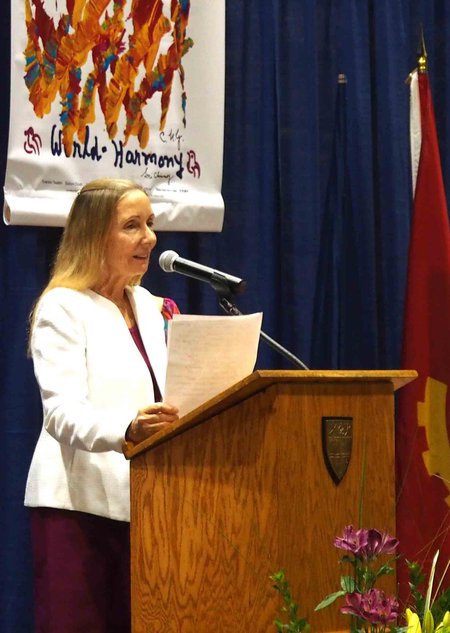 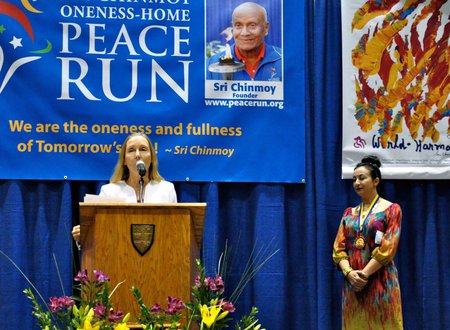 Mayor Jim Watson is the next Torch-Bearer Award recipient and is introduced by Pratyaya Hamilton, Director of the Sri Chinmoy Peace Foundation of Canada. Excerpts of Prataya's intrucion can be seen below.

"It is said that the character of a good leader combines wisdom, confidence and genuine concern for the wellbeing of one’s people. Our next recipient of the Peace Run Torch-Bearer Award, Mayor Jim Watson, is such a leader."

"Community involvement and service have always been at the forefront of Mayor Watson’s varied careers as a city councillor, a journalist, a Member of Provincial Parliament and the Mayor of Ottawa. He has served on the board or as honorary chair of several community organisations, including the Riverside Hospital, the National Arts Centre and the Forum for Young Canadians."

"Mayor Watson’s creation of the Mayor’s City Builder Award, a civic honour recognising service, kindness, charitable work, and other exemplary achievements by Ottawa citizens, and his support of Youth Ottawa are just two of the many worthwhile local endeavours he is committed to."

"Mayor Watson’s service is not limited to Canada’s capital. It extends to the world community through such notable actions as a fundraising event to support victims of famine in East Africa and his chairing of a United Way campaign, in which he helped to raise a record $21 million."

"But it is his heartfelt concern and his support of local events—be it participating in plowing matches or lending a hand at a local soup kitchen—that endear him to the people of Ottawa. His years of active involvement and community service have made him the recipient of many awards and accolades, as he makes a point of celebrating the successes and achievements of everyone and everything in the city he loves." 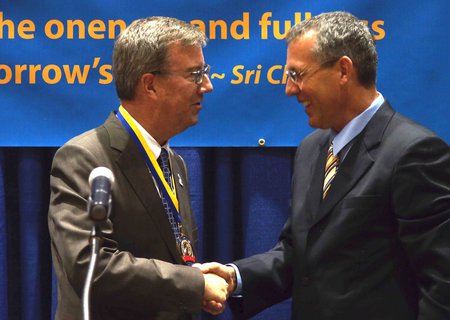 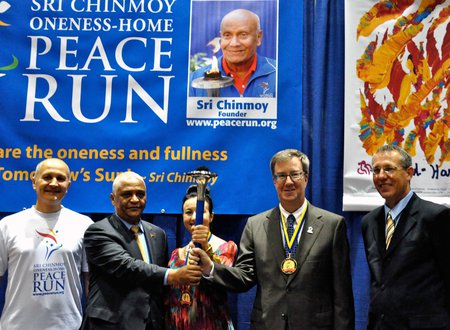 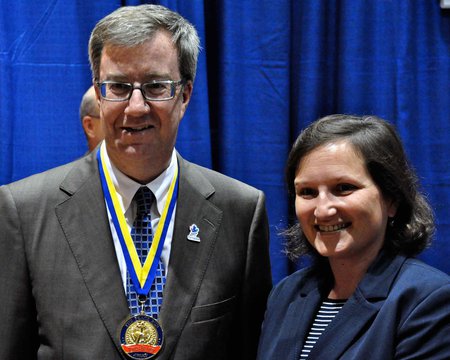 Over 150 invited guests including Ambassadors, Diplomatic Representatives, Members of Parliament, representatives from numerous non-governmental organizations based in Ottawa and citizens alike attended the evenings celebration. We are so very grateful for their participation and their heart-felt encouragement in this unique Peace initiative envisioned by Sri Chinmoy back in 1987. 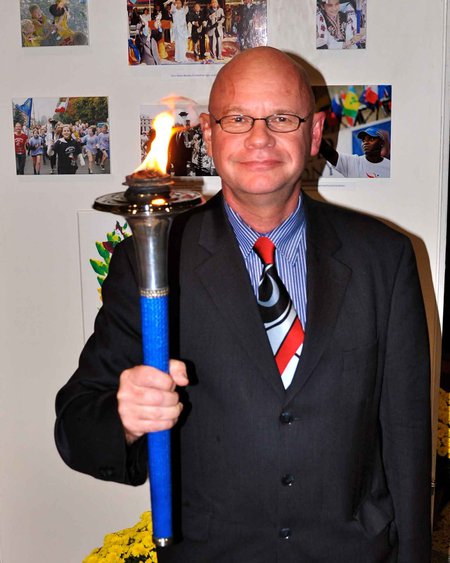 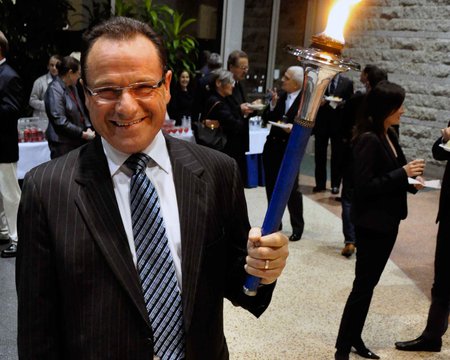 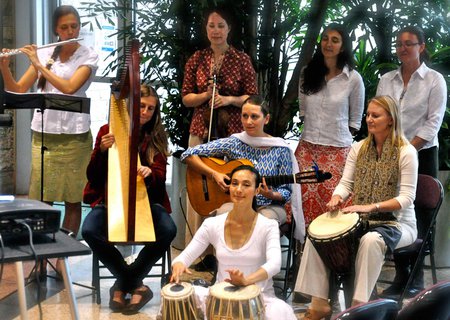 The evening closed with refreshments and live musical performance by local musical ensemble "Sanghit Surabhi" (sangitsurabhi.ca). Appreciated by all the guests present, they performed beautifully during the evenings closing reception. 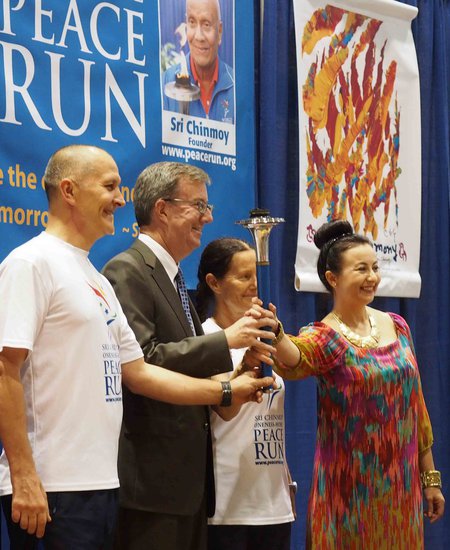 We would like to extend our most sincere gratitude to Ambassador Biljana Gutic-Bjelica for her vision and leadership and for her efforts here to showcase the Peace Run in a brighter light within the Diplomatic community here in Canada. And to Mayor Jim Watson for his kind participation and tireless dedication, encouraging bold new local initiatives and service to the community.

Sunrise on Signal Hill and Peace at the Fireworks…