at the United Nations Office in Geneva 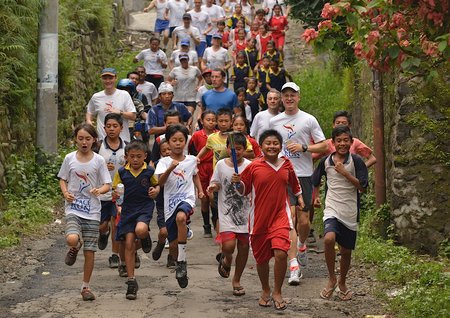 Now in its fourth year following the adoption in 2013 by the United Nations General Assembly of a dedicated resolution, the International Day of Sport for Development and Peace, which is celebrated on April 6, saw the inauguration of a unique photo exhibition at the United Nations Office in Geneva (UNOG).

A Peace Run photo was among the several dozen photographs on display at UNOG between April 6 and 15, 2017, which are dedicated to promoting development and peace globally through sport at a grassroots level. The Peace Run photo on exhibit was taken in Indonesia earlier in the year and features the international Peace Run team being accompanied by a group of enthusiastic children running amidst rice fields and lush vegetation (see photo above).

The dedicated text underneath the exhibited Peace Run photo reads:

Sudaji Village, Bali, Indonesia, Indonesia Peace Run/Apaguha Vesely
Local children take turns running with the Peace Torch joining international team members from the Sri Chinmoy Oneness-Home Peace Run. The Peace Run global relay visited a number of schools in Sudaji, running alongside rice paddies, to share a message that everyone can take a step for peace. Since the Peace Run was founded 30 years ago, it has traversed over 150 countries, covering nearly 632,000 km, to promote international friendship and understanding, touching the lives of millions of people.

This unique and expressive photo exhibition titled “We Play Together” is part of a campaign led by Antonio Guterres, the Secretary-General of the United Nations, to declare 2017 as the year of peace. “Peace must be our goal and our guide,” the UN Secretary-General said, urging all citizens, governments and leaders to strive to overcome differences. “I appeal to you all to join me in committing to peace, today and every day. Let us make 2017 a year for peace,” he added.

The Sri Chinmoy Oneness-Home Peace Run welcomes and fully supports this renewed aspiration for peace at the highest international level. Peace Run was founded by the late peace advocate Sri Chinmoy in 1987 as a grassroots and volunteer-based initiative with the vision to promote peace through an Olympic-style torch relay across the world.

To follow Peace Run online, visit www.PeaceRun.org.
The UN peace initiative through sports can be viewed online at https://www.un.org/sport/.
The photo exhibit can be accessed on social media via #WePlayTogether. 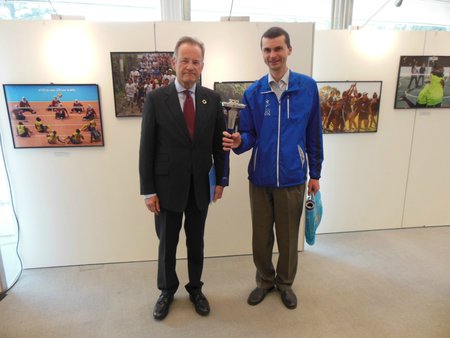 A Peace Run volunteer holding the torch with the UNOG Director-General, Michael Møller (above), and a representative of the Permanent Mission of Quatar (below) which sponsored the event, with the showcased Peace Run picture in the background. 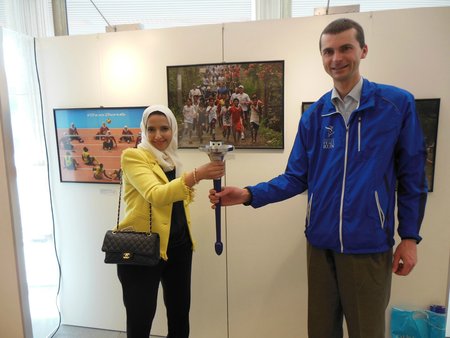 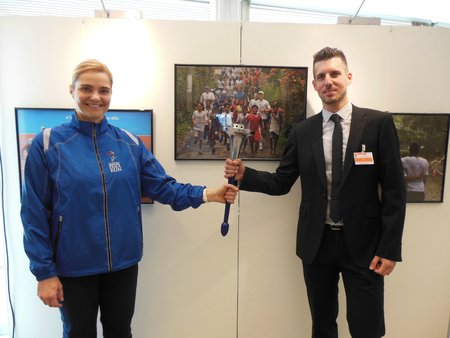 A Peace Run volunteer holding the torch with Marc Nava of the Taekwondo Humanitarian Foundation, with the showcased Peace Run picture in the background.