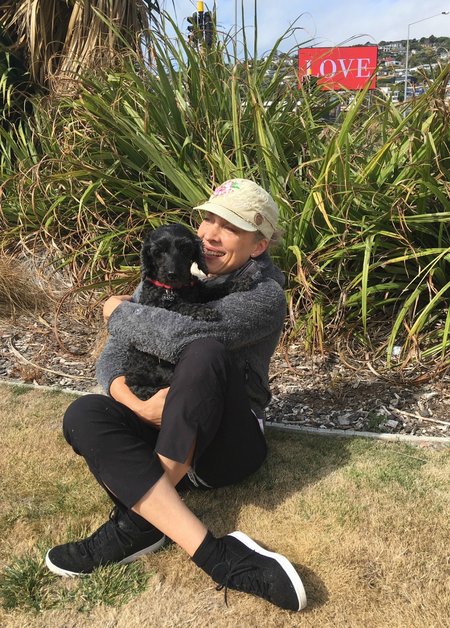 Some may know Susannah Kenton as a voice artist; an actress; a co-author of numerous books on inspiration and health with her mother, Leslie Kenton; an EFT practitioner; but the New Zealand Peace Run team has been blessed to have known Susannah for many years as a beautiful person who her gives her time selflessly and lovingly serving humanity.

This week we ask Susannah about her latest project: the LOVE billboards; what inspires her to do good; and how we can all share this message of love.

Susannah, along with her friend Lesley Huntley, was responsible for posting 22 billboards around New Zealand displaying only the word: “LOVE.” Here is what she said...

"John Pogachar in Spokane, Washington, was soul searching about how to bring more love into the world. He went into nature and got this idea to put the word LOVE on a billboard. He came home and was second guessing himself, saying, “Who am I to do that?” but then he kept seeing signs - he'd see the word Love in a shop window, or on somebody's t-shirt. Finally, he saw a rock on the ground with the word “Love” painted on it and he decided to take action. He spent nearly US $1,000 dollars of his own money, to put up a LOVE billboard and thought he’d leave it at that. But people got curious. They asked questions. The news channel came and interviewed him. Little by little word spread and other people got inspired. They too put up Love billboards. By the time I contacted him, there had been 85 billboards worldwide.

My friend Lesley, who like me had seen the documentary, “The Illusion of Money” with John in it, came to me and said, “For the anniversary of the mosque shootings I want to put up a LOVE billboard in Christchurch.” I said, "What a great idea. Let's do it!”

Then I thought, how do you put LOVE on a billboard? Where do you begin? I drove around town with a friend and we looked at billboards and began to imagine them saying LOVE.

Lesley is a solo mum of two girls, and has a busy dog-walking/pet sitting business. She was also in the middle of moving house at this time. Nevertheless, she managed to put up a Give-A-Little page, and a Facebook page and we just began. We raised some money and decided to pay for one billboard for one month.

I had a meeting with a billboard company and it was all very business like, sitting there talking about different sites and pricing. It was a bit overwhelming, to be honest. At first the guy was very professional and reserved, but when I spoke about what the project was and what it meant to me his eyes started to tear up and I realised the energy behind this project had a kind of innocence: because it's just about love, so it had the ability to touch hearts.

I had done a sacred circle for a beautiful community in Ilam and it turned out that one of the women there worked for a billboard company. She spoke to her boss and he said, “We’ll just charge you a nominal admin fee to put up electronic billboards for the weekend. We'll do a few of them. Meanwhile, we had decided we would buy 6 electronic billboards from the first billboard company and they had donated 4 to bring it up to 10. We hoped we could raise enough money to afford this. When the second company came in, the first said they would match their price, giving us an even more generous discount. It was like this feeling of love was alive and people were catching it, and then it started to be even more magical. I reached out to a third billboard company and they said they would love to participate. They gave us billboards at Christchurch Airport. And from there on there was no more paying for anything and two more companies offered to help free of charge. By the end we had 22 billboards total around New Zealand for that weekend"... 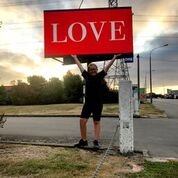 "There were moment's when I felt overwhelmed, but always when I needed help it arrived magically. It was such an invitation to lean in and trust my heart. I believe the Universe is unfolding this kind of magic for us all the time and if we just surrender and trust and stay in alignment with love or with our purpose then we're carried and the project is carried.

It brought me such a sense of confidence and trust because I didn't think I knew how to put love on a billboard, but when 22 of them went up I thought - you don't have to know how, you just have to have a vision for something that touches your heart, then communicate it and stay open. Also, no one who got involved was doing it to make themselves look good. People were joining us and offering their services and support because they loved the idea.

I’m not a natural event organiser. There was quite a lot of admin, signing contracts, filling out forms, etc. all of which were beyond my comfort zone. I also felt responsible to our donors to make their money go as far as I possibly could. (One lady donated just $3 and I was so touched by that because it's what she could afford. It meant just as much as someone who was able to donate more.)"... 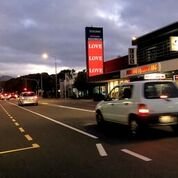 "The project helped me learn to trust the impulses that arise in my heart and take action on them. At the beginning of the year, I started to do some longer meditations and what grew out of those was a feeling of dropping into my heart more deeply. I experienced a clearer connection to guidance from within – a feeling of being on purpose and letting love be the way.

I used to divide the world into two kinds of people: those that naturally want to do good and those that don't. Then I realised that there's only one kind of person. When we are connected with our true nature and we're not confused we all act from love. If everybody could they would because there's nothing more delicious. Even the most unkind or greedy or disconnected person is touched when they see or feel love. It’s like coming home"... 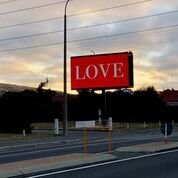 "In this slowing down time at the moment there's an amazing opportunity for each of us to do our own soul searching and connect with what matters most. Many people, like John Pogachar, want to do good in the world.
What stops them might be a belief, such as: I don't have the money or the know-how or the resources.

What I’ve learned is you don’t need any of those. You just begin with a vision - LOVE on a billboard - and then you take the next right step. You don’t let fear of the unknown limit you. Instead, you let love guide you".

Susannah is a regular customer and dear friend of The Lotus-Heart Restaurant in Christchurch, which is dedicated to peace and was named by Peace Run founder, Sri Chinmoy. She also has a beautiful website sharing more of her hearts offerings called heartpod 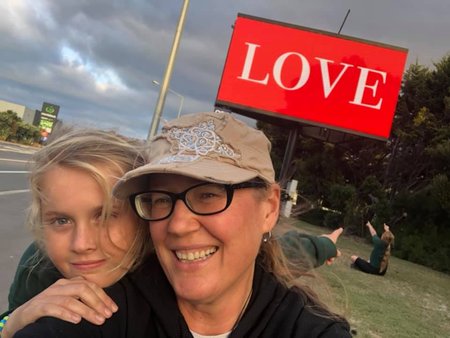 Susannah's friend, Lesley, pictured with her two daughters, Kyra and Elyse; and one of the LOVE billboards- her dream realised! 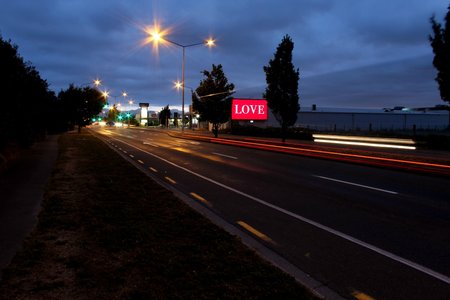