Here is a video we made for the g7+ conference. 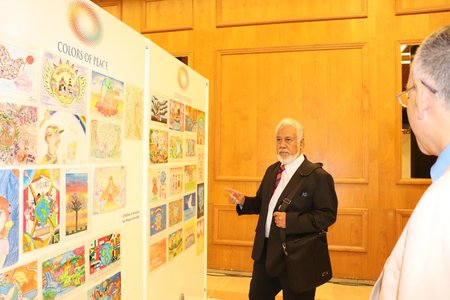 This report covers two days, June 26th and 27th, when we attended the g7+ Ministerial Conference at the invitation of freedom-fighter Xanana Gusmão (above) who at different times served as both the former President and Prime Minister of Timor-Leste.

The g7+ is a truly remarkable organization dedicated to serving fragile states by providing an environment where they can learn from each other’s experience as well as serving as an advocate for broader organizations such as the UN and the World Bank.

They are an intergovernmental organization of countries that are in a fragile situation or have been affected by conflict and are now in transition to the next stage of development.

Here is the video we made documenting the two days of the conference in Lisbon. 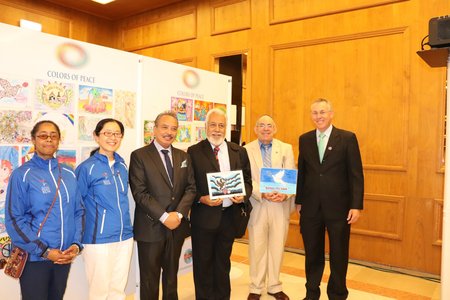 Xanana Gusmão, (centre holding the painting) who the g7+ refer to as their "Eminent Person" is greatly respected within the organization. Mr. Gusmão invited us to participate in the conference when we visited with him in Timor-Leste. 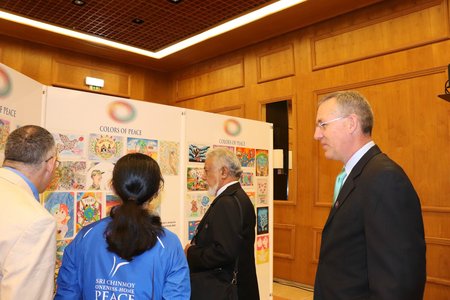 Mr. Gusmão was particularly taken with the children's artwork on peace we were exhibiting and encouraged all of the member states to provide their nation’s children with the resources to create similar artistic expressions. 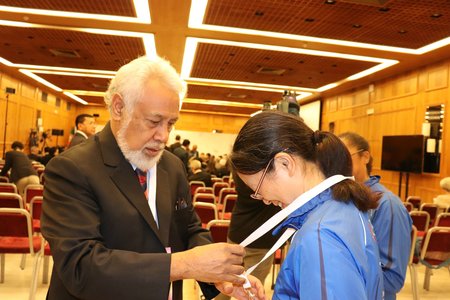 Xanana took great delight in presenting each of our team members with their official g7+ Conference name tag. 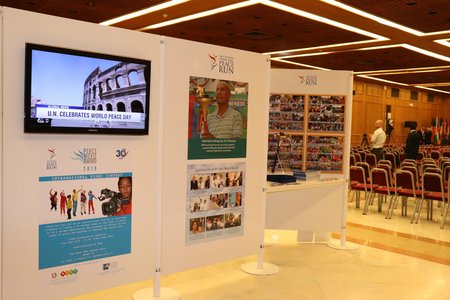 Our Peace Run display at the back of the g7+ conference room. 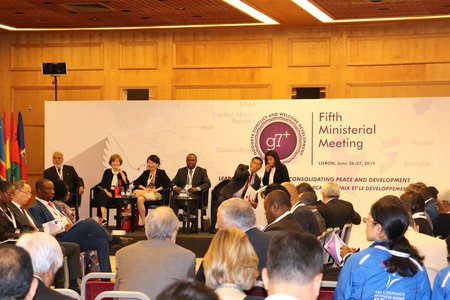 The opening session of the conference about to begin. 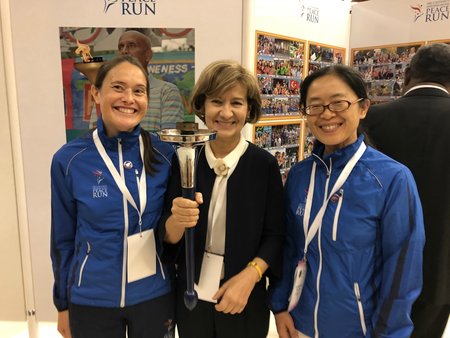 HE Teresa Ribeiro (centre), Secretary of State of Foreign Affairs and Cooperation for Portugal, joined Florbela (Portugal) and Harashita (Japan) for a photograph, holding the Peace Torch. 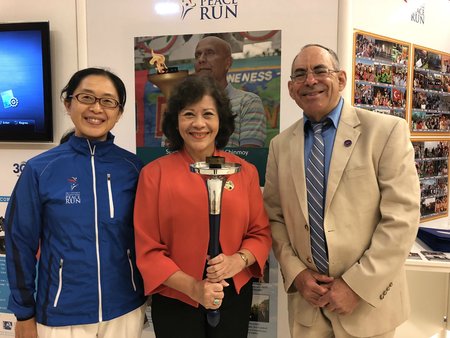 Noeleen Hayzar, former Under Secretary-General at the United Nations, held the torch and was deeply inspired to stay in touch. 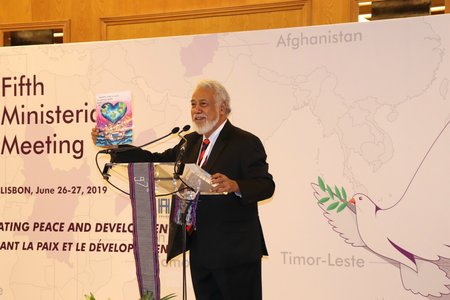 As part of Xanana’s offering of the keynote address, he had selected some of the children's paintings to hold up as poignant examples of young people's depth of understanding regarding what peace means to them. 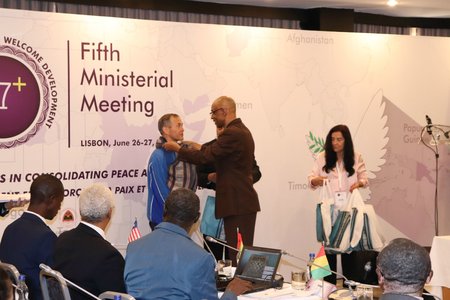 The next day as part of the Peace Run participation in the g7+ Conference Xanana generously invited each of the participating Ministers to present a traditional Timorese hand woven scarf to all of our team members. 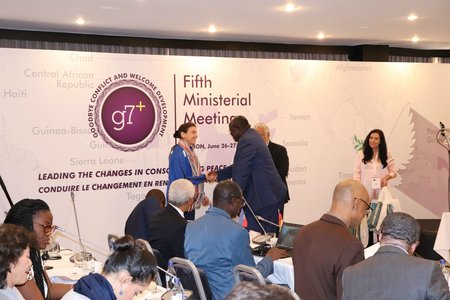 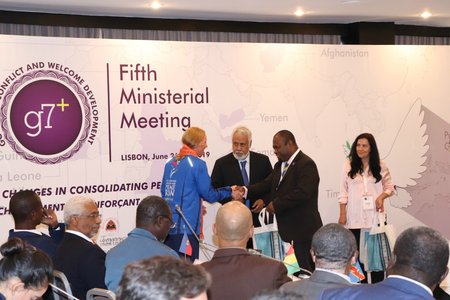 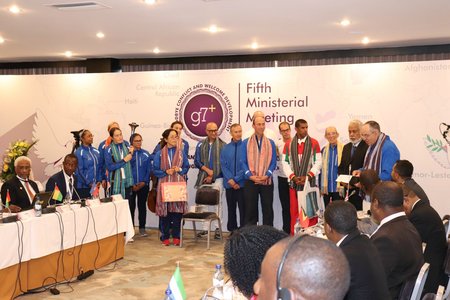 We took great honour in presenting the g7+ Eminent Person, Xanana Gusmão, with the Sri Chinmoy Culture-Light Award from Sri Chinmoy's Jharna-Kala Art Foundation. Recognizing and celebrating Xanana's tireless leadership and inspiration to serve fragile states and help pave a path toward self-reliance and peace for each of these nations. 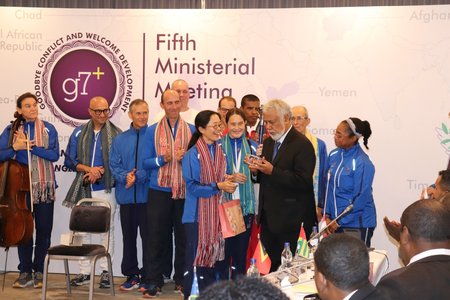 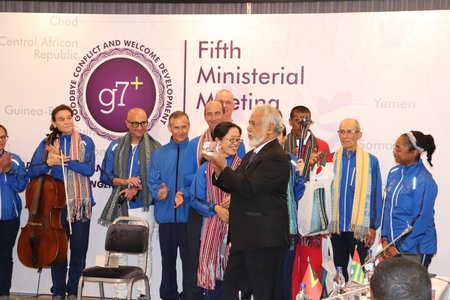 Upon receiving the award, a crystal rendition of Sri Chinmoy's painting entitled "Unity", Xanana showed the award to each participating Minister repeating the words "Peace be with you!" 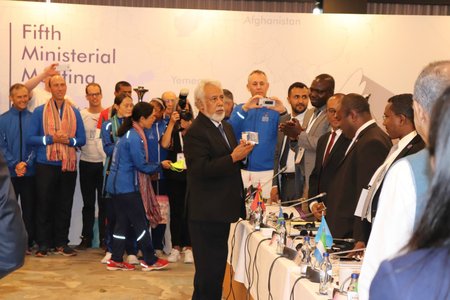 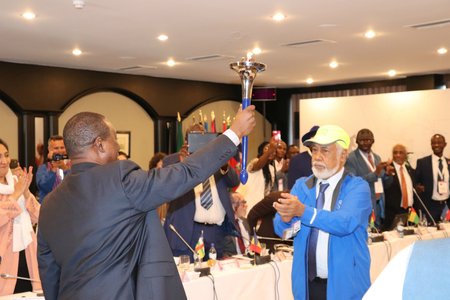 As a finale, Xanana presented the Peace Torch to the g7+ Chair, H.E. Francis Kai-Kai, of Sierra-Leone, Former Permanent Representative of the Republic of Sierra-Leone to the United Nations and currently serving as their Minister of Planning and Economic Development. 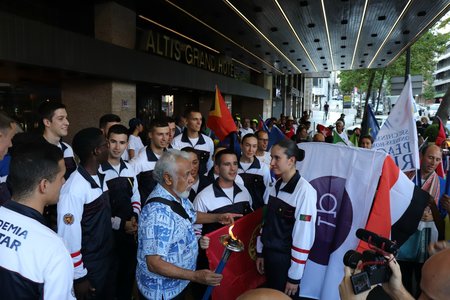 Xanana then came downstairs to start us off on our Peace walk through the streets of downtown Lisbon. 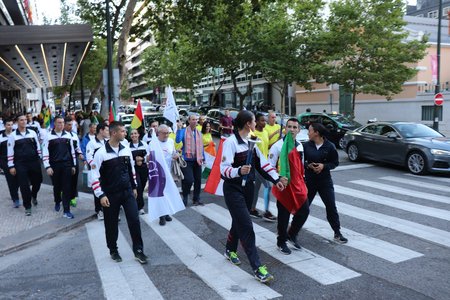 Many young people of Lisbon joined in as did many of the conference attendees who were glad for an opportunity to enjoy the sights of downtown Lisbon. 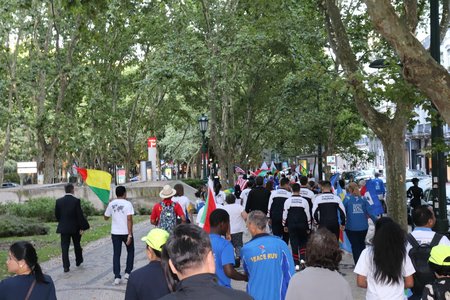 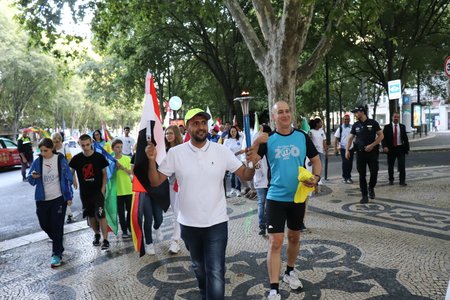 The representative from Yemen took great pride in carrying the Peace Torch. 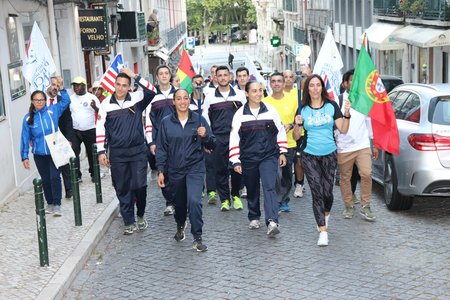 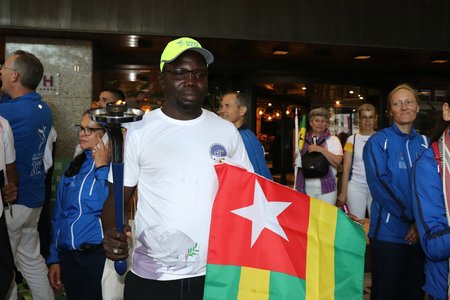 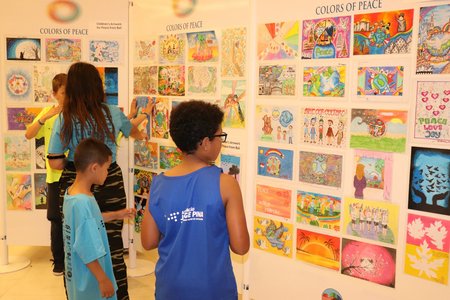 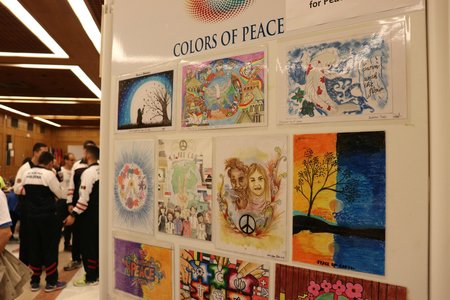 We would like to express our gratitude to the g7+ secretariat for the kind encouragement in facilitating our participation in this conference.