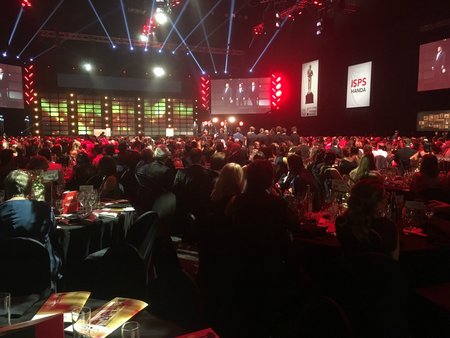 Several of us were greatly honored to have the opportunity to attend the 2018 ISPS Handa Halberg Awards Dinner. It is New Zealand's premiere sporting awards event, and is a black tie evening, so we could not go along in our usual Peace Run tracksuits!

The event was initiated in 1963 by Sir Murray Halberg, who was a stellar athlete in his time, being the first New Zealander to break the four minute mile, and winning gold in the 5000m at the 1960 Rome Olympics. He founded the Halberg foundation to raise money to enable disabled New Zealanders to have equal opportunities to enhance their lives through sport and recreation.

The inspiration for the dinner was to recognise New Zealands top sportspeople, and at the same time raise money and awareness to fulfil the goals of the Halberg Foundation. 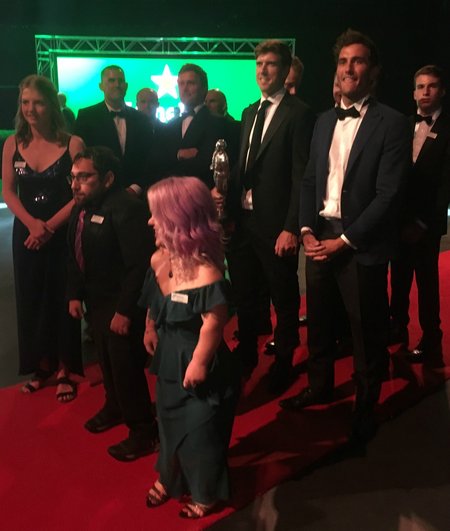 Every year there are several different categories, and one Overall Winner of the Halberg Award. The trophy was brought in by Halberg Youth Council Representatives, including Jacquie Ruth and Kiran Dixon, as well as representatives from last years Overall Winner, Emirates Team New Zealand. 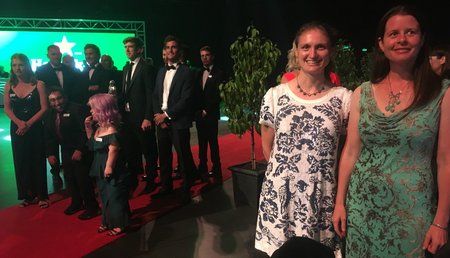 Vera and Preetidutta were right there to cheer them on! 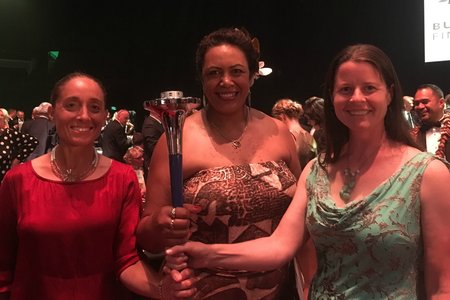 Harita and Preetidutta are pictured holding the Peace Torch with beloved New Zealand sportswoman, Beatrice Faumuina, who was tonight inducted into the New Zealand Sports Hall of Fame. Beatrice won a gold medal in the discus at the 1997 World Championships, becoming the first New Zealander to win gold in any event at the World Championships. She went on to win five major titles between 1992 and 2010, including two Commonwealth Games golds.
Beatrice graciously commended the Peace Run and offered us her best wishes for our upcoming run. We were thrilled to meet her! 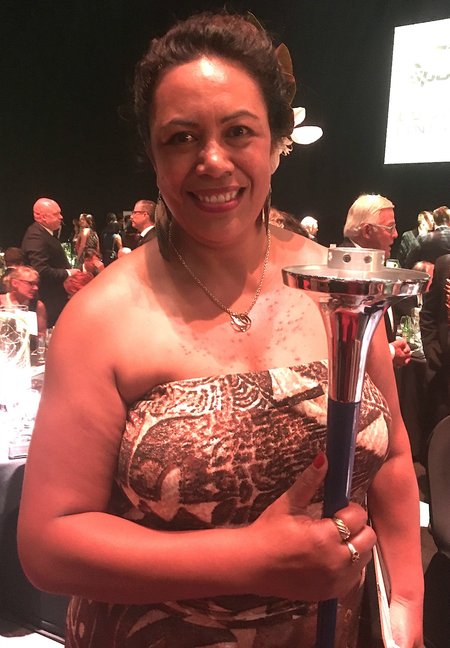 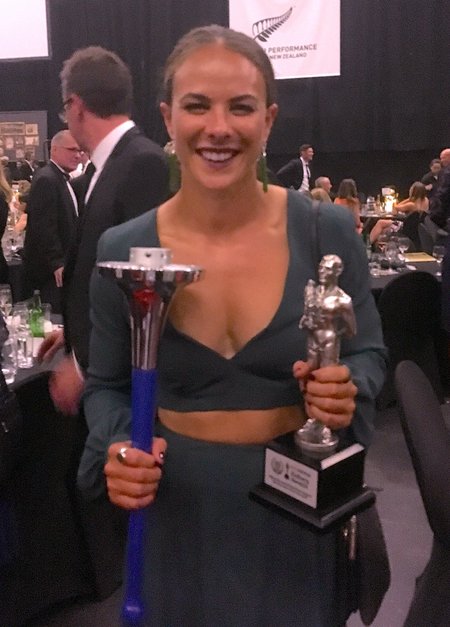 Lisa Carrington won the High Performance New Zealand Sportswoman of the Year Award for the third year in a row. Lisa has dominated the Women's Kayak in multiple distances the last few years, winning five World Championships and three Olympic medals, two of them gold! She is the first New Zealand woman to win multiple medals at the same Olympic Games.
Lisa is a wonderful athlete and person, and we were honored and delighted to meet her and have her hold our Peace Torch. Thank you Lisa!! 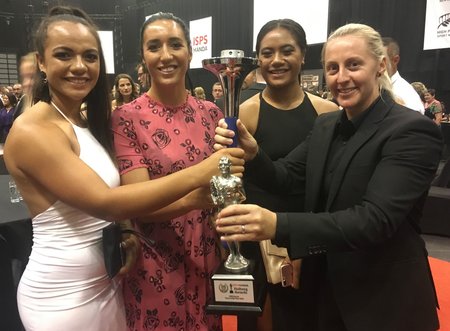 Several of the recipients of the Team of the Year Award held the torch. See if you can guess which team they are from! Pictured here are Stacey Waaka, Sarah Hirini,(team Captain), Alena Saili and Kelly Brazier.
We were delighted to meet these super inspiring athletes, and hope they may be able to join us to help run the torch a small section of our Cape Reinga to Bluff route this year! 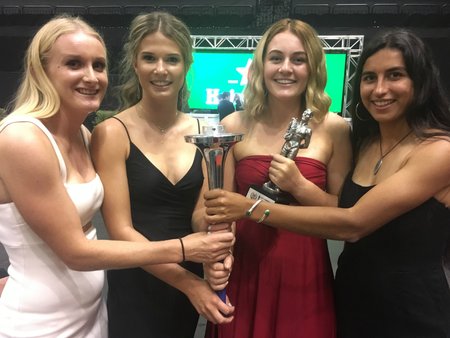 New Zealand's Favourite Sporting Moment of the Year went to Anna Leat, holding the trophy and pictured third from the left. Anna's successful penalty shootout in the FIFA Under 17 Womens World Cup game against Japan put New Zealand into the semi-finals. The moment captured the hearts of everyone who saw it, as the entire team piled on top of Anna after she scored the goal. The team won bronze, gaining New Zealands first medal at a FIFA World Cup!
Some of the players are keen to run with the Peace Torch next month, so we are super excited to have them join us! 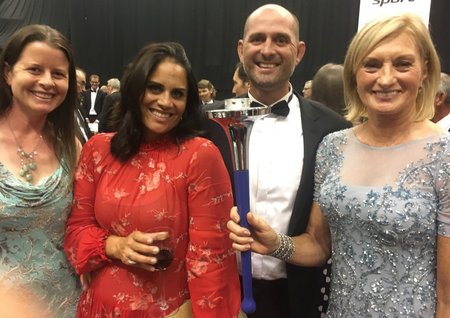 By chance we ran into Anita and Blair Wolfgram, who are family friends of Preetidutta, and coincidentally recently purchased a lodge in Bluff where they have already agreed to host the entire Peace Run Team for the night when we get there! They were super excited to meet us and hold the Peace Torch! We are so grateful to them and the many other kind and generous people throughout New Zealand who have so enthusiastically agreed to support our Peace Run this year. 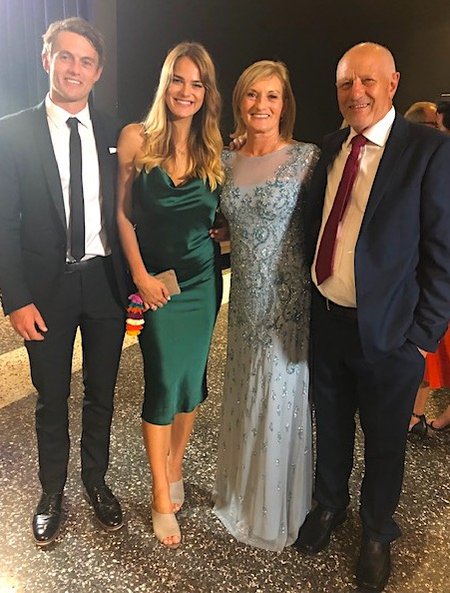 Allison was joined by her son, Elliot, his partner, Hanna, and her husband, Alan. 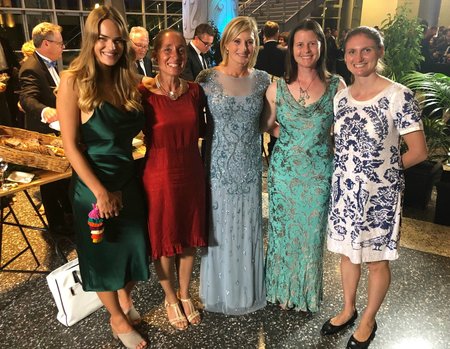 Hanna, Harita, Allison, Preetidutta and Vera before saying goodbye.
It was only because of Allison's magnanimous heart of oneness and generosity that we were able to attend this evening's event.
Allison was the 1981 Halberg Supreme title winner after magnificently winning both the Boston and New York marathons.
Allison met Peace Run founder, Sri Chinmoy, in New York in 1981, right after she won the New York Marathon. He honored her achievement and even wrote a song for her. She has been a good friend and supporter of the Peace Run since it's inception, and continues to work untiringly and passionately for progress in the fields of health, fitness and peace in New Zealand in many different ways.
Tonight, along with former Prime Minister John Key, she introduced the High Performance New Zealand Sportsman of the Year Award, which went to champion shot-putter Tom Walsh. She spoke about the power of inspiration, and the significant role sport plays in bringing peace to the world.
Thank you Allison for all you do!!!