Take a walk down memory lane with this archival footage of the Peace Run participating in the 2011 Philadelphia July 4 parade and then journey west to Seattle and Ingomar, Montana in 2006 for a taste of Americana.

About a month ago Natabara and Salil did a bicycle tour of the monuments in Washington DC. Here's the video of their experience. 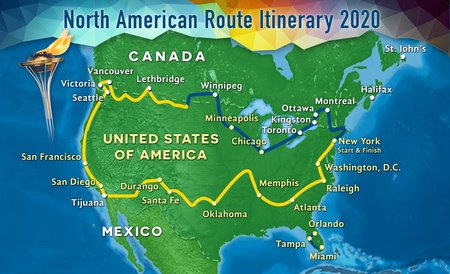 The yellow marks how much we have run by July 8. Looks like we are about two thirds of the way home. This part of the route is usually pretty hot and dry and very sparsely populated. We'll be heading up into Canada next week so we have a lot to look forward to. 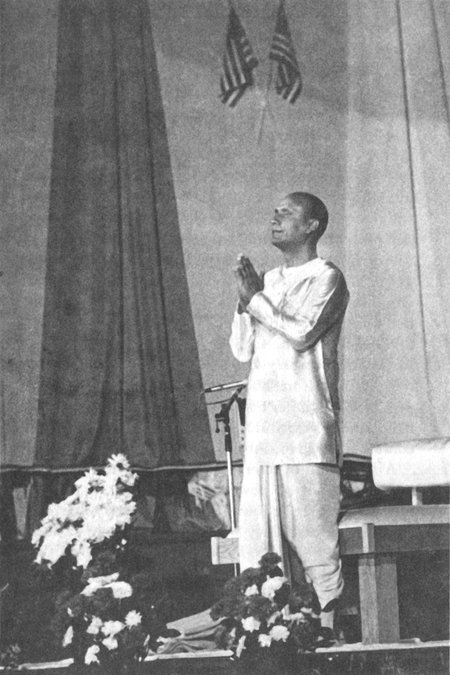 The words to the America song composed by Sri Chinmoy are as follows:

This photo was taken on July 4, 1976 during a 13 hour program offered in honour of America’s Bicentennial at the 72nd Street Bandshell in Central Park, New York, NY, USA. 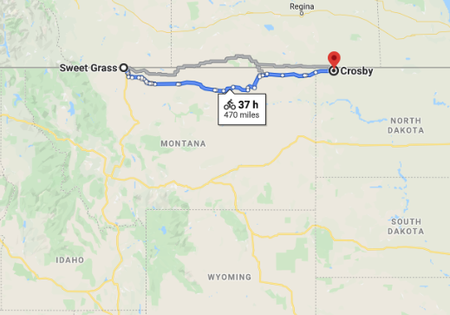 Our route this week takes us right along the border with Canada. This would have been a new route for us so we'll definitely come back this way just as soon as we are able to. 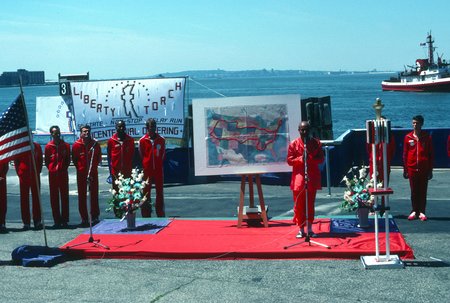 In 1976 Sri Chinmoy created an event entitled Liberty Torch. It was a non-stop relay run through all 50 states commemorating America's Bicentennial. In many ways it was the precursor to the Sri Chinmoy Oneness-Home Peace Run. Here is an image taken at the start of the event in New York. 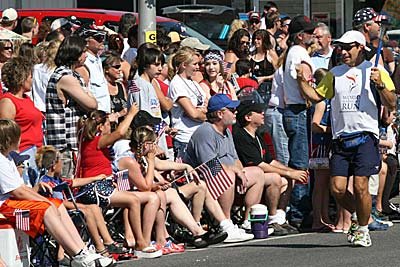 Following are photos from various Independence Days we've experienced on the Peace Run and World Harmony Runs over the years. This one is from 2005. 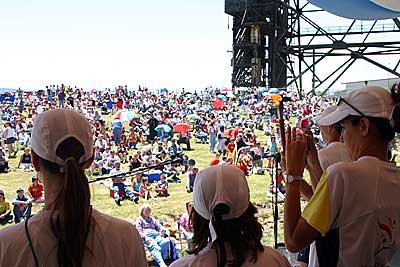 Later that day we appeared at a music festival. 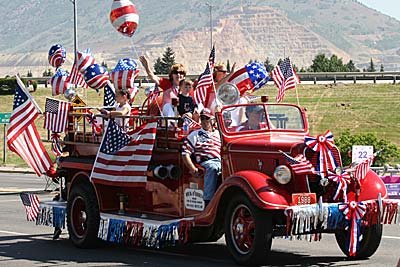 An Independence Day Parade in Montana is 2006. 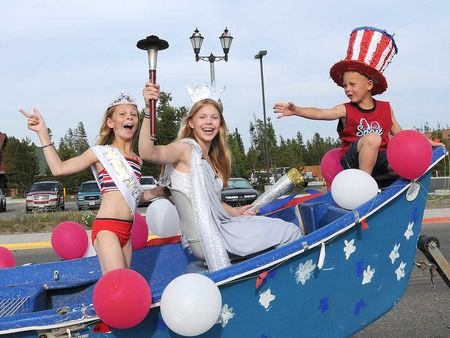 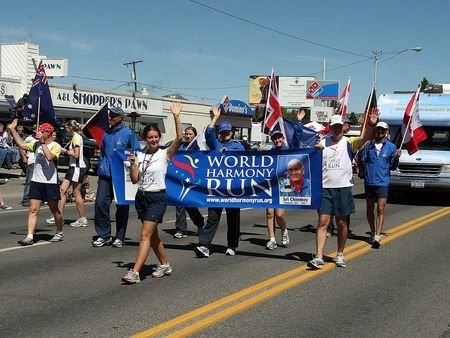 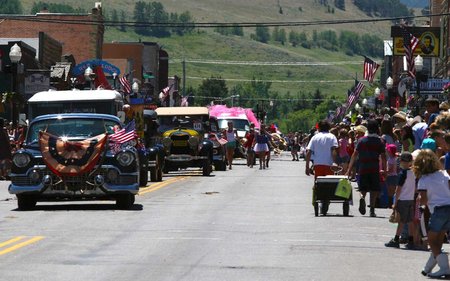 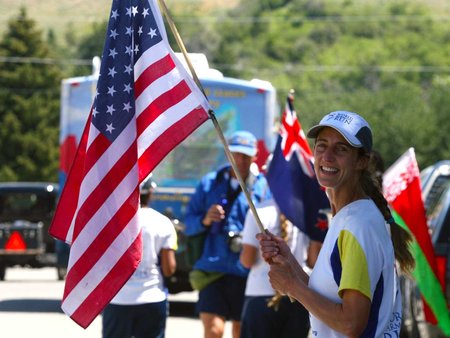 Rupasi celebrating Independence Day in 2010. Rupasi writes, "Happy happy birthday dear America. Your soul of courage and life of self giving will always transcend your temporary challenges and make you stronger for it. I am forever grateful and humbled you would allow me to incarnate on your lofty shores. The Supreme's Vision of God Manifestation on earth will always resonate in your heart of oneness and will live as a divine blessing in those who love you." 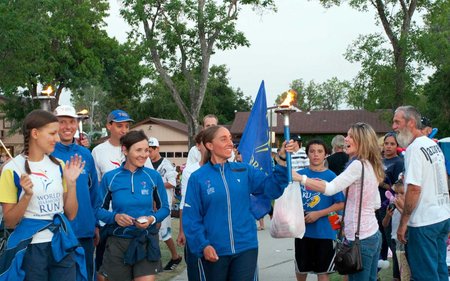 The Peace Torch makes a sensation on July 4, 2012 as we get ready for a fireworks show. 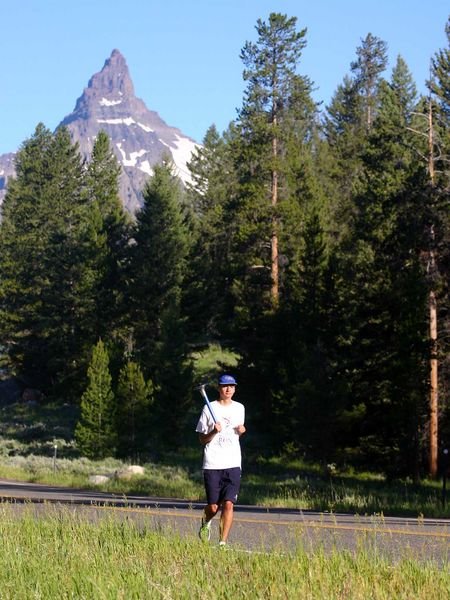 Dave Morrison from Florida makes his way with the Rockies in the background. During this time of year we are usually in "Big Sky" country. The scale is different out here. 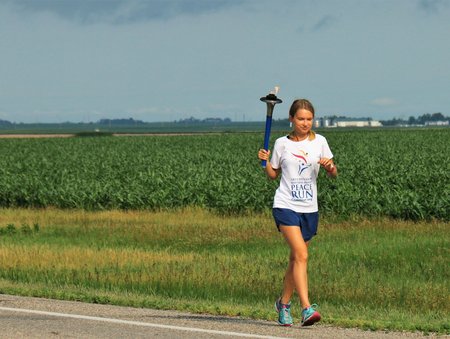 Kshema from Ukraine getting used to seeing cornfields on July 4, 2018. 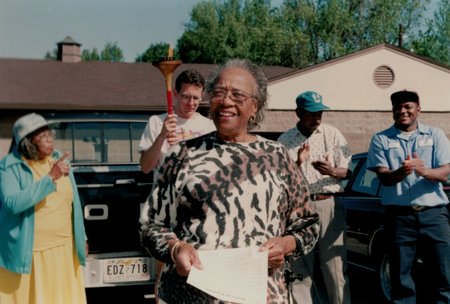 Salil pictured in the background in Carlisle, SC in 1993. Reflecting on his experiences in America that year and since Salil writes, "My favorite part of the North American Peace Run is when we run through the south. South Carolina, Georgia, Mississippi, Alabama, Louisiana and more. Nowhere in the world have I felt the hearts of the people are larger, more loving, kinder and more beautiful than in the American South. And predominantly it is African Americans who have moved me so much in this region.

I remember a perfect morning with heavy dew on the thick green grass that bordered the quiet country road on which I was carrying the torch. It was early May in 1993 when I was running into the small town of Carlisle South Carolina. The only other team member with me for that section was Gary Pedroni and he had driven into town to scope out if there was a reception.

As I was running westward on Rte 72 with the sun warming my back I came across a young African American man about my age Ifar right in the picture above) walking towards me. He was dressed in a very clean navy blue uniform you might expect to see tradesman wear - all the way down to his work boots.

I smiled and waved as I went by thinking he was on his way to work. Without a word he fell in beside me and began running. We still had about a mile into town. I gave him the torch and asked him if he knew about the Peace Run. He smiled shyly and said the Mayor told him to come out, meet me and run.

Another 300 meters and there was another young man similarly attired and he joined as well. This scene repeated itself all the way into town where we had about 8 or 9 people all running with the torch.

We arrived at the Carlisle town hall where another 10 or so people were waiting and there was Gary as surprised by this heartfelt gathering as I was.

A well dressed dignified African American woman of about 55 or 60 years seemed to be running the show. It turned out she was the Mayor of Carlisle (pictured in the foreground above).

She invited us all to stand in a circle. She gave us about 30 seconds before looking at our effort disapprovingly and said sternly, “I used to be a school teacher and this ain’t no circle!” We sprang to attention and organized ourselves in a fashion that met with her approval.

She then proceeded to lead us in a most heartfelt ceremony with prayers and gospel songs. She invited each of us to share our feelings about peace. This was followed by simple wholesome refreshments.

I remember at the end of the Peace Run in New York of that year Gary said to me, “No matter what happens, we’ve always got Carlisle South Carolina.” I understood then that this experience had also deeply impacted him.

The 1993 Peace Run was my first in the South and I feel this moment was the beginning of my love for the South. 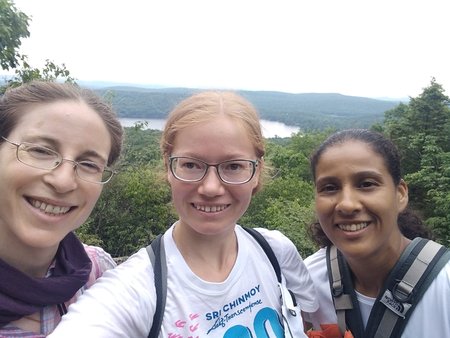 Suchita from Hungary, Sweta from Russia and Gesiane from Brazil. Sweta writes, "Happy Independence Day, America !!! The whole world celebrates with you !!! This is a very, very special date, not only for America, but for the whole world.

I am very glad that in the distant 1775 to the letter of the English king George III with a request to send Russian troops in the amount of 20,000 soldiers to suppress the uprising, the Russian Empress Catherine II refused: "... I barely begin to enjoy the peace, and your Majesty knows that my empire needs peace."

Russia and America are very much connected, but the strongest thread is music. Here is one example of how music erases boundaries and instills friendship and love in the hearts. In the spring of 1891, P.I. Tchaikovsky was invited to open the famous Carnegie Hall with his concert. As a result, he gave concerts in New York, Baltimore and Philadelphia. This is what he writes in diaries and letters about America. “It turns out that I am ten times more famous in America than in Europe. There are my things that Moscow does not know yet, but here they are performed several times a season and they write whole articles and comments on them. I’m a person who is much more more important than in Russia. The musicians at the rehearsal met me with enthusiasm. " "Amazing people these Americans!" He notes the sincerity, directness, generosity and cordiality of Americans, and also notes the similarity of the American and Russian mentality. “Besides Russia, I have never seen such a cordial attitude towards foreigners, such a readiness to serve and please in every way.” "I foresee that I will remember America with love."

Another story happened when I returned from New York to Moscow. At JFK Airport, they asked me for a passport to put a note on the date of departure from the United States. When I gave my passport, I heard: "Russia !!! We hear about you every day on TV!" I smiled and replied: "And we hear about you every day on TV." And then something happened inside me, it was very very warm in my heart and I wanted to say: "Because we love each other very much!" And this is absolutely true." 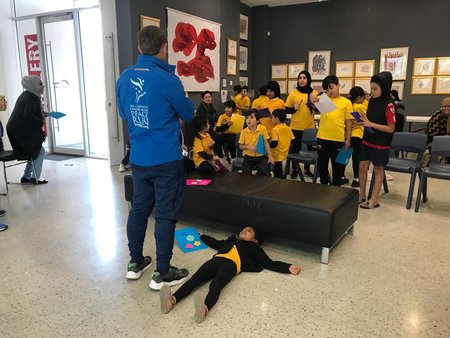 Last week we heard from our team member Grahak in Perth Australia about the beautiful gallery exhibiting Peace Run founder, Sri Chinmoy's, artwork for peace. Here we see Grahak giving what must have been a compelling presentation to visiting students. Obviously one student wanted to see things from a different perspective. 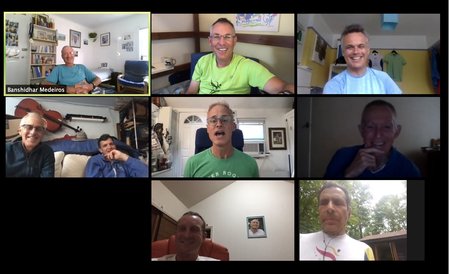 Since we're unable to run as a team from time to time the we get together over video conference. It is always lot's of fun and surprisingly inspiring. We read out some of Sri Chinmoy's writings on America and told stories. Everyone left with a deep sense of satisfaction and happiness. In this shot Natabara is telling us a funny story.